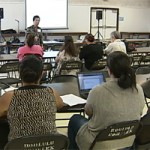 HILO, Hawaii: The Hawaii Interagency Council on Homelessness met with the public in Hilo as well as Kona on Monday, gathering input this month on its draft strategic plan to prevent and end homelessness in Hawaii.

The council is in the midst of holding eight community sessions throughout the state to go over key points and get feedback on the draft of the State Plan.

The plan is posted online for the public to review as well as comment at hawaii.gov/dhs/HomelessnessPlan

Officials say these community meetings are a continuation of the statewide, coordinated effort to address homelessness which started with the appointment of the first Governor’s Coordinator on Homelessness and progressed with the work of the 90-Day Action Plan to Address Homelessness, and the establishment of the HICH.

The Hawaii Interagency Council on Homelessness is responsible for developing for the Governor’s review and approval, a statewide Strategic Plan to prevent and end homelessness, and advising on the Plan’s implementation.