An pdate on Hilo's public parks. 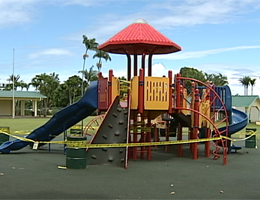 HILO, Hawaii: This week, we reported on a new park that was opened in to the public Hilo.

We also spoke to Parks and Rec planner James Komata that day, and got some updates on Hilo’s other public parks.

Like Lincoln Park, for example… portions of which were closed last week, following the discovery of several holes in the rubberized surface of the Dr. Ruth E. Oda Playground.

Parks maintenance staff has performed inspections that determined the fall zones in certain areas of the playground are unsafe due to the weakened surface.

Corrective actions started last week Thursday, with maintenance staff cordoning off the affected area. The department plans to have its workers undergo specialized training so they will be able to perform the technical repairs in-house instead of a private contractor being hired at taxpayers’ expense.

The county says staff training and the repair work will be completed as soon as possible. In the meantime, parents can always bring their children to the playground at nearby Keikiland, one at Hilo’s Mohouli Park or visit the new playground at the free Pana‘ewa Rainforest Zoo & Gardens.

The other areas of Lincoln Park remain open for park users, including keiki swing sets.

A few blocks away, a large undertaking at the Gilbert Carvalho Park.

County crews are working diligently to clear overgrowth at the edge of the popular facility to create additional off-street parking.

Limited on-site parking has prompted an increasing number of park users to leave their vehicles along the shoulder of Waiānuenue Avenue or in the nearby grassy median, Deputy Parks Director Clayton Honma said. Spectators often park vehicles along the park’s perimeter barricades to view softball or youth baseball games, unaware that they are within the public right-of-way.

These practices impede sight distances and create distractions for motorists. Its already a tough merge into the mauka-bound lane from the nearby signalized intersection. Also, the route serves as the main access for emergency vehicles transporting patients to Hilo Medical Center.

To further enhance safety for park users, a sizeable banyan tree near Waiānuenue has been removed. This pre-emptive action was necessary to avoid the threat of collapse due to termite infestation discovered in the tree, combined with significant amounts of overhanging deadwood, a shallow root system and its location adjacent to a fresh water spring.

Folks may remember the scene in 2009, when this huge banyan tree collapsed just up the road, creating a tremendous mess that took weeks to clear.

The tree was not among Hawaii County’s exceptional trees, which is a designation the County Council applies to special trees deemed worthy of preservation.

Volunteer labor provided under contract with Hawaii Corrections Industries was used for the initial clearing work to assess the area’s potential for development. Those inmates have since been replaced with trained county crews and heavy equipment to complete the more technical site development and tree-removal work.

Reopening is expected to occur during April, hopefully in time for the Portuguese Day in the Park Festival.

Elsewhere… the covered court project at Panaewa Park is coming along.

Big Island Video News was there in August 2010 when the $4 million plan was explained to the community.

The new complex will be able to accommodate volleyball, basketball and tennis. A ten-foot chain link fencing would serve as walls, and the courts would be lit after dark.

And, along the bay… the scenic Reeds Bay Beach Park looks like completely different.

The county hopes to have it open soon.

The beach park was closed at the end of August 2011, and although work was expected to take four months, it has not been open since.

The park improvements will include new accessible walkways with integrated seat walls; grassing and landscaping; and new park amenities such as outdoor showers, a drinking fountain and picnic tables.

Its not just Hilo that is looking forward to new park facilites and improvements around Hawaii County.

The Department of Parks & Recreation is moving forward with planning a new $5.5 million community park on a 56 acre parcel in Pahoa.

And, up in North Kohala, the community awaits the completion of improvements to Keokea Beach Park in Kapaau…

Improvements and upgrades arent the only news items from Hawaii County Parks and Rec… the department touted the latest numbers in its safety record recently.

Parks and Rec has increased workplace safety dramatically, which the department says has saved taxpayer money and boosted employee efficiency.

The drop in accident claims occurred while the department has faced budgetary and staff reductions, while remaining focused on enhancing the varied recreational programs, services and facilities it provides and maintains island-wide.

A committed focus on safety, ongoing training and the skill level of the department’s employees all contributed to the reduction in workplace injuries, Honma said.

As Hawai’i County’s second-largest department behind the Police Department, the Department of Parks and Recreation currently has more than a 420-person workforce, which rises to more than 500 when seasonal programs like the popular Summer Fun and Learn to Swim events are occurring.