South Point is known for its sheer sea cliffs, its strong ocean currents, its open pasturelands, and its whipping winds. But the constant bluster wasn't enough to keep the Kamaoa Wind Farm going... 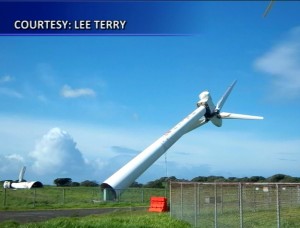 If a windmill falls and nobody is around, does it make a noise?

SOUTH POINT, Hawaii: Welcome to Ka Lae – the southernmost point in Hawaii and the United States.

South Point is known for its sheer sea cliffs, its strong ocean currents, its open pasturelands, and its whipping winds. But the constant bluster wasn’t enough to keep the Kamaoa Wind Farm going… on Friday, out of the original 37, there was only one left standing.

Since the windfarm opened in 1987, it has become something of an obsession for Waiohinu resident Lee Terry. Terry has spent quite a lot of time at the sight of the monumental dismantling, capturing the historic moments with his camera.

The rest of the toppled windmills now lay in a mountainous heap on the ground, dotting the landscape like crashed aircraft, awaiting their fate as scrap metal.

According to a recent article in Pacific Business News, the out-of-shape Mitsubishi wind mills were decommissioned five years ago, after owner Apollo Energy Corp’s 20-year contract with the power company expired. Sources say the windfarm typically supplied HELCO with a total peak output of 7.5 Mega Watts.

Steven Pace, CEO of the San Francisco-based company, told PBN that the 91 acres of land will be leased to cattle ranchers. The proposed land-use is right at home here at South Point, where the rolling pastures full of grazing horses and cows stretch as far as the eye can see. The fallen windmills will be sold as scrap metal in China.

On Friday, the very same wind that powered these windmills provided a stay of execution for this last turbine… Terry says that contractors told him the wind was too strong on Friday to even attempt to take down the final one.

Watching the rusted windmills fall one by one, Terry recalled a special connection he had with one turbine in particular. He and his brother once scaled the tower to catch the view from the top.

There have been mixed emotions about the windfarm project over the years. The windfarm may have been an attraction for visitors, but some residents consider it an eyesore. And for the consumer, high hopes for energy savings never materialized.

Once the decommissioned site fell into disrepair, the Kamaoa Windfarm became the poster child for the green energy skeptics and opponents of so called “Big Wind” – as exemplified in this short film by PF Bentley.

The failure also put the spotlight on the state of energy production on Hawaii Island… how could a source of clean, renewable energy be allowed to fall into ruin?

But the era of windmills at South Point is not over…

A few miles away, clearly visible from the cliffs of Ka Lae, these 14 windmills turn constantly in the strong breeze.

The Tawhiri Power LLC Pakini Nui Wind Farm, a joint venture between Apollo Energy and EFS-G LLC, is a 21-megawatt facility. It went online in April 2007.

And, now that the memorable landmark along South Point Road is nearly erased, what will Terry tell visitors when giving directions to Ka Lae?