A hydro-electric project in the mountains could power about 400 homes in Pahala, not too mention the new Ka'u Coffee Mill and macadamia nut husking operation down below.

PAHALA, Hawaii: High in the mountains above Pahala in the district of Ka’u, a large project is underway. The infrastructure is being laid for a sustainable future.

John Cross, the land manager for the Edmund Olson Trust, along with the man himself, recently guided Big Island Video News up the mountain to the Keaiwa Reservoir, in order to visualize the project that could power about 400 homes in Pahala, not too mention the new Ka’u Coffee Mill and macadamia nut husking operation down below. 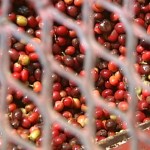 Much of the irrigation system was installed in the time of the sugar plantations, but now everything is being upgraded. Its a massive project, requiring work on steep cliffs and muddy hillsides.

Olson knows about massive projects. The island businessman is the chairman of A-American Storage Management Co., Inc., the 7th largest self storage company in the country. He has donated hundreds of thousands of dollars for land conservation efforts. He is also member of the Hawaii advisory board of The Trust for Public Land. He owns more than 13,000 acres on the Big Island and almost 3,000 acres on O‘ahu, and has entered into voluntary easement agreements with the Hawaiian Islands Land Trust to protect large swaths of ag lands near his Pahala home.

This project, as well as the Ka’u Coffee Mill, may be the highlite of his legacy in this area of Ka’u.

As a brand, Ka’u coffee has been blazing a path towards global recognition, with continued victories at world renown cupping competitions. As a name, Ka’u is even giving the celebrated Kona-brand a run for its money.

The region has reinvented itself with its new found coffee industry, making local agricultural celebrities out of hard working farmers like Bull and Jamie Ka’ili’awa. The success is punctuated every year with the popular Ka’u Coffee Festival.

The opening of Olson’s Coffee Mill is another step in the direction of regional sustainability, which the community celebrated in January.