The North Kohala community is celebrating the news that 27 acres of cherished, undeveloped coastal lands have been purchased by a community nonprofit.

HALA’ULA, Hawaii: The North Kohala community is celebrating the news that 27 acres of cherished, undeveloped coastal lands have been purchased by a community nonprofit.

Kauhola Point was the focus of a year long coordinated effort to raise funds and awareness in the hope of protecting the land from development and keeping it open as a resource for the community. This 7 minute film (right) uploaded to Vimeo one year ago by Christina Au entitled “For Kauhola Point” served at the time as “a plea to help save the beautiful Kauhola Point… It is historically and culturally valuable and is cherished by the Kohala Community.” Now, months later, the community has reached its goal.

The Trust For Public Land issued this media release on the news:

The spectacular property encompasses the vast majority of the peninsula known as Kauhola Point. The property affords Kohala families a safe and beautiful place to spend quality time together and engage in healthy outdoor activities, is a recognized model of community stewardship, and connects the people of Kohala to their rich Hawaiian history. 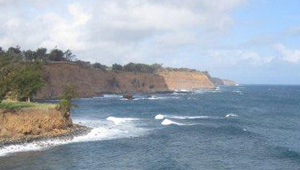 Kauhola Point has been used as a community-gathering place from wa kahiko (ancient times) to present day. King Kamehameha I, who united the Hawaiian Islands, rested here after warfare and focus on peacetime activities—recreation, marriage and agriculture. Kamehameha taught his most beloved wife, Ka‘ahumanu, how to surf in the waters of Maliu off the property’s shores. As noted on the attached 1893 Hawaiian government map, the property was the site of Kamehameha’s Taro Patches and Kamehameha’s Fishpond. The remains of Mulei‘ula heiau, possibly Ohau heiau, and another unmarked sacred site, are thought to be places of worship of Kamehameha and other chiefly lines that existed prior to the Kamehameha dynasty.

During the sugarcane era, this was the official recreation area for plantation families, and the site of numerous company and ethnic organizations’ picnics and softball games. To this day, children in North Kohala grow up exercising with their kupuna (elders), fishing, swimming, and learning how to surf at “lighthouse,” a loving nickname given to the property and surrounding area due to the iconic Kauhola Point Lighthouse that once stood guard there.

Maika‘i Kamakani ‘O Kohala, Inc. (“Maika‘i”) is a trusted organization made up of native Hawaiian cultural practitioners, community leaders and kupuna (elders) who are deeply rooted through ancestral ties and present-day commitments in the Kohala community. Maika‘i is dedicated to preserving and perpetuating the Hawaiian cultural practices of Kohala. As landowner, Maika‘i will ensure community access is maintained for recreational, cultural and agricultural purposes – remaining undeveloped and a community resource in perpetuity.

Maika‘i’s President Stephanie N. Naihe Laxton commented, “Mahalo piha to all our partners, including The Trust for Public Land, the State Legacy Land Conservation Program, the many private donors, and especially to the people of Kohala. The protection of Kauhola Point has proven to be an accomplished task embracing in patience, love, honor and the continuity of the Spirit of Aloha.” Kohala middle and high school children in Malama Kai Foundation’s Ocean Warriors Program use the property as an outdoor classroom for marine education and land stewardship programs, and community educators plan to involve the students in on-site agriculture, native reforestation, and shorebird rehabilitation.

Co-Director of the Ocean Warriors Program, Elizabeth Pickett, reflected, “It has been so rewarding to see the surfers, fishermen and regular users of Kauhola Point come together with the Ocean Warriors to hold coastal cleanups, sell t-shirts, and organize a series of fundraising events to protect this place that we all love. The Ocean Warrior students who have been involved in the protection of Kauhola are proud of what they have accomplished and will remember this forever. Hopefully other communities will be able to learn from the ground-up stewardship process that continues to grow at Kauhola Point.”

Maika‘i purchased the property from Chad & Jenifer Davis. As North Kohala residents for more than 20 years, they understood how important this property was and chose to work with The Trust for Public Land as an alternative to development. Jenifer Davis stated: “I am humbled to be part of this project. I am at peace knowing that my favorite spot on earth, the incredibly beautiful Kauhola Point, which has been enjoyed by countless generations in the past, will remain undeveloped, and be open and accessible to future generations.”

The $1.3 million purchase price consisted of $975,000 of State Legacy Land Conservation Program funds, $100,000 from the Dorrance Family Foundation, $100,000 from the Freeman Family 3 Fund of the Hawai‘i Community Foundation, $67,610 in a donation of value from the landowners, $25,000 from The Trust for Public Land’s Hawaiian Islands Advisory Council Member Edmund Olson, $17,390 from the Kohala community, and $15,000 from the HEI Charitable Foundation and the Hawaii Electric Light Company. The Zirinsky Family, Trust for Public Land donors, were inspired by the local community’s dream for a community garden, and are providing support to make this dream a reality.

The State of Hawai‘i Legislature established the Legacy Land Conservation Program (LLCP) in 2005 to provide funding to public agencies and community organizations for land conservation. The LLCP receives a portion of the state’s real estate conveyance tax (a tax paid by sellers when property is sold). The state Department of Land and Natural Resources administers the LLCP. From 2006 to 2012, the Legacy Land Conservation Program has granted $21.5 million in awards, and attracted $41.4 million in matching federal, county and private funds towards the protection of over 7,960 acres of cultural, natural, agricultural, and recreational resource lands. Funded projects leverage about 67% matching funds from federal, county, or other private sources. On average, for every state dollar spent, $1.02 in matching funds are leveraged.

William Aila, Jr., Chair of the Board of Land and Natural Resources, stated that: ” Kauhola Point is a model of a successful State partnership with a local community striving to protect and care for its resources. When the state supports a community’s existing relationship with its lands and resources, the outcome is the protection of both the lands and the community support system for managing them.”

The Trust for Public Land, a private national non-profit organization, facilitated the transaction and assisted Maika‘i Kamakani ‘O Kohala, Inc. in drafting funding applications for the state and private foundation funds totaling $1,215,000, or 96% of the acquisition funding. The project could not have happened without a generous $25,000 grant from the Office of Hawaiian Affairs to support The Trust for Public Land’s Native Lands Project Manager Position, in addition to several years of start up support by the Trust for Public Land’s Hawaiian Islands Advisory Council Co-Chair Kimo Campbell, who recently passed away.

Kauhola Point marks The Trust for Public Land’s 25th completed project in Hawai‘i, where it has conserved more than 40,250 acres of land throughout the islands. On Hawai‘i Island, The Trust for Public Land helped to conserve Kawa in Ka‘u near the plantation town of Pahala, Pao‘o and Lapakahi (Lamalaloa and Kaipuha‘a) along the Kohala coast, the Honu‘apo Fishpond and Estuary in Ka‘u, the Wao Kele O Puna Forest Reserve, the Ki‘ilae shoreline as part of an expansion of the Pu‘uhonua O Honaunau National Historic Park, and the Kalapana expansion of the Volcanoes National Park.

The Trust for Public Land’s mission in Hawai‘i is focused on protecting coastal/shoreline lands, working lands that contribute to Hawai‘i’s food, energy, and water self-sufficiency, and heritage lands that perpetuate Hawaiian culture.

Kimo provided key continuing support of The Trust for Public Land’s native and heritage lands program in Hawai‘i. I’m sure Kimo would be very pleased to see that another place where local families can gather and enjoy Hawai‘i’s shorelines will be protected in perpetuity.”