Hours of hula culminated on Saturday night in Hilo, when the 49th annual Merrie Monarch Festival competition wrapped up and the winning halau were announced.

HILO, Hawaii: Hours of hula culminated on Saturday night in Hilo, when the 49th annual Merrie Monarch Festival competition wrapped up and the winning halau were announced.

In many ways, the night belonged to the group from Oahu… Halau I Ka Wekiu. Kumu Hula Karl Veto Baker and Michael Nalanakila’ekolu Casupang’s halau was the top place finisher in both the Kane Kahiko and Kane ‘Auana divisions with 1,147 points overall, and even took 3rd place overall in the wahine division.

The Merrie Monarch is an event that everyone on the Big Island marks on the calendar. Folks plan for the week of hula far in advance.

Mayor Billy Kenoi recently spoke to Big Island Video News about how it it special to hold the Hawaiian cultural festival in Hilo. The mayor, who was front and center in this year’s royal parade, says the county puts in a lot of work behind the scenes to help the event run smoothly.

Now, attention turns to next year’s big 50th anniversary of the festival, which officials promise will be even bigger than this year’s event.

On Saturday, the Merrie Monarch Festival Royal Parade marched through Downtown Hilo, finishing up a few hours before the last night of competition got underway.

This year, over 120 floats, vehicles, marching bands and other units participated in the annual tradition, and folks lined up for miles around the parade route, under unusually sunny skies, without rain. 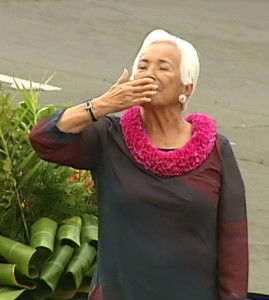 This year’s Grand Marshall was Aunty Fanny Au Hoy, the curator of the Hulihe’e Palace in Kailua-Kona for 35 years, the summer home of the Merrie Monarch himself, King David Kalakaua. She retired from the position last year. Aunty Fanny’s ohana has long been involved in the preservation of Hulihee. Her sister, Aunty Nona Wong, is a recently retired docent at the palace, and their mother, Lei Collins, also served as the palace curator for many years, before the task was passed on to Aunty Fanny.

One of the honored spots in the Royal Parade is always reserved for the new Miss Aloha Hula.

Sterling performed “He Inoa No Kaleimakalii” for the kahiko section of the contest, and for “He Inoa No Na Keiki O Ka Bana Lahui” auana.

The parade was full of Hawaiian cultural flavor and civic groups. Leading the march, the Royal Order of Kamehameha the First… and following them, the Hilo chapter of Ahahui Ka’ahumanu Helu ‘Ekolu. One of the most impressive displays came from this large marching unit: Ke Aukahi ‘Olelo Hawaii… comprised of the many schools and institutions that perpetuate education through the Hawaiian language.

Some of the well known Big Island halua, absent from this year’s competition, still had their decorated floats in the parade.

A international Hoike night group, Rangi Moana – the memorable performers from Rapa Nui – had their own spot in the parade.

And the Hawaiian hallmark of the Merrie Monarch parade: the pa’u riders.

Following the Queen’s unit, throughout the parade… horse mounted units representing the Hawaiian Islands… here, the Pa’u Hawaii Island princess, and this is Maui… followed by the Maui Onion pooper scooper…

The parade is also a showcase of the many local high school bands in East Hawaii…. the talents of Waiakea High and Intermediate School, Hilo High School, and St. Joseph’s were on full display. Even the Waiakea Intermediate School Ukulele Band was featured

The military always plays a big role in the parade… this year, Sailors from the Oliver Hazard Perry-class guided-missile frigate USS Crommelin enjoyed a memorable visit to Hilo.

Cmdr. Michael Johns., the commanding officer of USS Crommelin, along with his executive officer and command senior chief, led his crew down Kilauea Avenue. Rear Adm. Frank Ponds, commander of Navy Region Hawaii and Naval Surface Group Middle Pacific, walked beside the Crommelin Sailors, waving and shaking hands with people along the way.

Crommelin arrived at Hilo Pier on April 12th, for a three-day port visit, where the crew had an opportunity to enjoy nightly hula competitions and to take part in the culturally-driven Hawaiian event.

Sailors were able to enjoy liberty call soon after arriving at Hilo and some took the opportunity to participate in a community relations project at a Girl Scout Service Center.

Blogger Damon Tucker was in attendance, and he caught this video of the sailors participating in a little impromptu Tahitian dance.

Also visiting from afar, the representatives from Ikaho – whose Shibukawa, Japan is a sister-city of Hawaii Island. Ikaho is located about 3½ miles from Tokyo’s Narita Airport and is well-known as a hot spa resort area.

Ikaho has its own Merrie Monarch Festival every year, the largest in Japan. 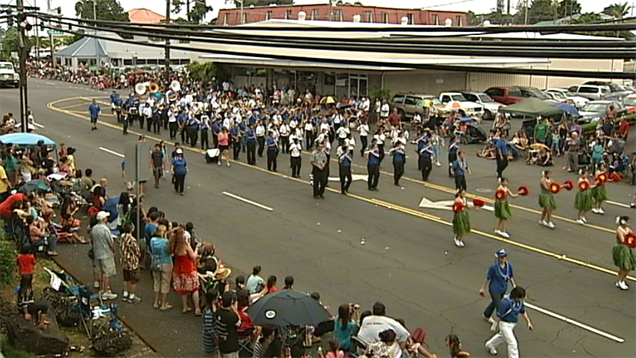 There were some impressive floats from Ka’u in this year’s parade… Check out these representing KAHU radio 91.7 fm… with “Big D” Demetrius Oliveri and company aboard the float for the community radio station located in Pahala. Right behind that float, the Ka’u Coffee Growers Cooperative, featuring the three coffee farms that were among the top 10 judged in the recent Roasters’ Guild of the Specialty Coffee Association of America, earning them the coveted title Coffee of the Year for 2012.

That’s Will and Grace Tabios of The Rising Sun, Lorie Obra of Rusty’s Hawaiian, and Francis and Trinidad Marques of Alii Hawaiian Hula Hands Coffee.

Onlookers also noted the increased participation of local businesses in the parade. The big box stores – like Walmart and Home Depot – presented elaborate floats this year, and not to be outdone… KTA SuperStores, which put together their first ever Merrie Monarch Parade float this year.

And heralding the Hari Boat Races slated for this August at the Wailoa State Park… Hui Okinawa, which has one of the most popular floats year in and year out… the Hui Okinawa Kobudo Taiko club.