Mayor Billy Kenoi and a number of top officials joined in the blessing and introduction of five new 2012 Chevy Volt Hybrid Electric Vehicles on Tuesday at the West Hawaii Civic Center. 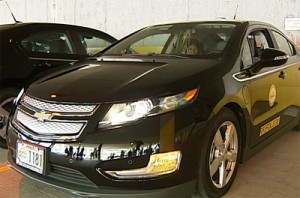 KEALAKEHE, Hawaii: Mayor Billy Kenoi and a number of top officials joined in the blessing and introduction of five new 2012 Chevy Volt Hybrid Electric Vehicles on Tuesday at the West Hawaii Civic Center.

The officials were excited to integrate the new cars with the 250 kw photovoltaic system up and running at the facility, allowing the cars to plug in and run entirely off the county produced energy… as long as they operate in a 30 mile area.

From the county office of the mayor:

While each vehicle costs $47,000, the County will offset that price with a $4,500 credit per car through the state’s EV-Ready rebate program. The cost of each vehicle also includes a bumper-to-bumper warranty for seven years.

Hawai‘i Island pays some of the highest fuel costs in the United States. In fiscal year 2011, the County’s transportation fuel bill was $7 million. These prices are likely to rise in the future, so making this transition to more efficient vehicles will help control these escalating costs.

Prior to purchase of the vehicles, the county received a grant from Better Place Inc. to have three charging stations installed at the West Hawai‘i Civic Center. Each charging station can handle two electric vehicles at a time. The Chevy Volt typically takes 3.5 hours for full charge. Available charging stations will be open for public use during regular business hours.

The video above shows a few scenes from the day, including a blessing by Kumu Keala Ching, and a test drive taken by Mayor Kenoi, West Hawaii Today editor Reed Flickinger and radio newswoman Sherry Bracken. Big Island Video News will have more from this event later in a report.