HILO, Hawaii: It was a circus outside the Windward Planning Commission meeting on Thursday; literally. Students, performers, and general supporters of Graham Ellis – the man behind the Seaview Performing Arts Center for Education – congregated around the Aupuni Center conference room before the 10 am permit revocation hearing, some in stilts and circus costumes. The enclave […] 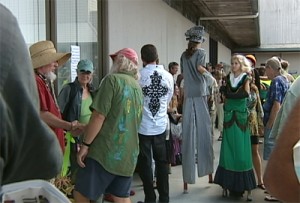 HILO, Hawaii: It was a circus outside the Windward Planning Commission meeting on Thursday; literally.

Students, performers, and general supporters of Graham Ellis – the man behind the Seaview Performing Arts Center for Education – congregated around the Aupuni Center conference room before the 10 am permit revocation hearing, some in stilts and circus costumes.

The enclave for jugglers, acrobats and other skilled performers – located near the shores of Kehena in Puna makai and called a “sustainable Eco-village” – conducts its operations under a special use permit issued by the County Planning Department. This includes a lease to the Hawaii Academy of Arts and Sciences Public Charter School, a weekly farmers market and bazaar, and also circus-related workshops and classes conducted under Hawaii’s Volcano Circus.

However, complaints and alleged non-compliance with conditions of the permit (like restrictions on what sort of performances can be held on the property, or required permits for certain structures) have led the planning department to consider stripping the organization of its permit, essentially forcing the closure of the operation.

The planning department posted this background for the revocation action on its website:

The Planning Department has received numerous complaints over the past several years alleging the applicant’s non-compliance with approved conditions of Special Permit No. 1122 and alleging certain activities that were not permitted under Special Permit No. 1122 occurring on the subject property. These alleged activities included, but were not limited to, the following:
a. holding public performances in which tickets were sold for a monetary fee;
b. the construction of several illegal structures;
c. a weekly farmer’s market which resulted in unpermitted off-street parking;
d. a weekly bazaar;
e. family and loud parties;
f. weddings.

For clarification purposes, you will observe that there are several different entities mentioned throughout the different correspondences associated with the property. These include Seaview Performing Arts Center for Education (SPACE), Hawai‘i Volcano Circus (HVC), Bellyacres, and Village Green Society. The original applicant for Special Permit No. 1122 is Hawai‘i Volcano Circus (RVC), which is represented continually by Graham Ellis. Ellis is also connected to the other entities mentioned above. Attempts have been made by the applicant (Ellis) to disassociate himself with certain activities occurring on the subject property by stating that the activity was conducted by another entity and not the applicant even though Ellis was clearly associated with the activity. It is the Planning Department’s position that the applicant is responsible for complying with all conditions of approval of the Special Permit on the subject property as required in Condition No. I, regardless of which entity is being accused for the violation.

The planning department detailed the numerous complaints it has received on the Sieview organization, but the final straw was the 25th anniversary Bellyacres celebration.

From the planning department’s background and recommendation document:

21. March 16,2012: A Notice of Non Compliance of Conditions of Special Permit No. 1122 and Order to Show Cause Before the Windward Planning Commission was issued by the Planning Director on March 16, 2012 to Ellis after a two-day fundraising anniversary event for Belly Acres was held on the subject properties despite previous warnings not to hold the two-day event. The Notice ordered Ellis immediately cease and desist from operating all unpermitted activities including the weekly farmer’s market and that all activities permitted under Special Permit No. 1122 were suspended pending the decision ofthe Planning Commission.

22. April 5, 2012: A Notice of Non Compliance of Conditions of Special Permit No. 1122 and Notice to Proceed with Revocation of Special Permit No. 1122 was issued to Ellis after the Planning Department continued to receive complaints that the unpermitted weekly farmer’s market, as well as other SPACE related activities has continued after the issuance of the March 16, 2012 Cease and Desist Order.

After discussion – and lengthy public testimony – the Windward Planning Commission granted Ellis a stay of execution, allowing SPACE six months to submit an amended special-use permit that will allow the group to operate legally in Seaview.

“The Notice of Violation was the result of a misunderstanding,” said Attorney Ted Hong, who represented Ellis at the commission proceeding. Hong shared his 9 page response to the commission with media. It addressed the controversial 25th anniversary party:

The Village Green Society only intended to celebrate its 25th Anniversary on February 24 and 25, 2012. It was a private party to which only Village Green Society members and their families were invited (plus adjacent neighbors). Donations were not required but were welcomed. In fact, (Hawaii’s Volcano Circus) which operates SPACE Performing Arts Center, specifically denied the anniversary event was associated with SAPCE of HVC itself.

Hong promised that HVC would meet the December deadline for the submittal of an amended permit application.