Tsunami warnings could be improved by GPS on ships, study shows

HONOLULU, Hawaii: A new study conducted by the University of Hawaii and the Pacific Tsunami Warning Center shows that commercial ships sailing around the globe could network to provide an improved tsunami warning system. From a weekend media release by the University of Hawaii, School of Ocean and Earth Science and Technology: Commercial ships travel […] 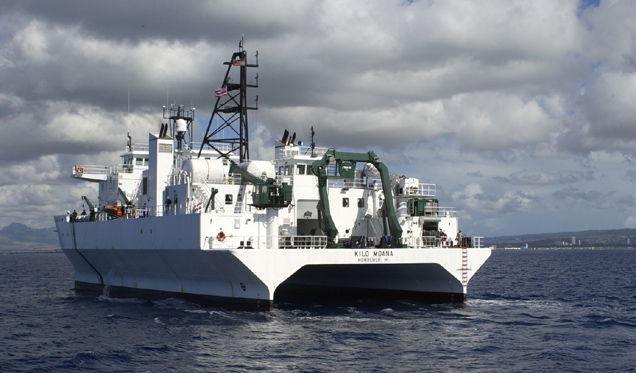 While in transit from Hawaii to Guam, the research vessel Kilo Moana detected the February 2010 Chilean tsunami. Image credit: SOEST/UHM.

HONOLULU, Hawaii: A new study conducted by the University of Hawaii and the Pacific Tsunami Warning Center shows that commercial ships sailing around the globe could network to provide an improved tsunami warning system.

From a weekend media release by the University of Hawaii, School of Ocean and Earth Science and Technology:

Commercial ships travel across most of the globe and could provide better warnings for potentially deadly tsunamis, according to a study published May 5 by scientists at the University of Hawaii – Manoa (UHM) and the National Oceanic and Atmospheric Administration’s Pacific Tsunami Warning Center.

James Foster, lead author and Assistant Researcher at the UH School of Ocean and Earth Science and Technology (SOEST), and colleagues were able to detect and measure the properties of the tsunami generated by the magnitude 8.8 earthquake in Maule, Chile (February 2010), even though, out in the open ocean, the wave was only about 4 inches (9.4 cm) high. The UH research vessel Kilo Moana was on its way from Hawaii to Guam at the time of the tsunami, and was equipped with geodetic GPS system recording data as the tsunami passed by.

Careful analysis of this data showed that the researchers were able to detect changes in the sea-surface height very similar to the Pacific Tsunami Warning Center predictions. This finding came as a surprise because tsunamis have such small amplitudes in the deep water, in contrast to their size when they reach the coastline, that it seemed unlikely that the tsunami would be detected using GPS unless the ship was very close to the source and the tsunami was very big. “Our discovery indicates that the vast fleet of commercial ships traveling the ocean each day could become a network of accurate tsunami sensors,” Foster said.

Although the initial warning for a tsunami is based on seismic data from the earthquake, the details about whether a tsunami was actually generated, how big it is, and where the energy is directed are currently provided by tide gauges and deep ocean pressure sensors (DART system). This is the information that is needed to accurately predict how big the tsunami will be for specific locations, and whether or not an evacuation, and the associated cost, is necessary. Tide gauges are restricted to land and therefore are sparsely distributed, while the DART systems are very expensive and hard to maintain. Consequently, during the 2010 Chilean earthquake, the DART sensor closest to Hawaii was out of order. In fact, nearly 30% of that network was down at the time.

Commercial shipping lines, however, run all around the Pacific basin and provide great coverage globally around tsunamigenic regions (areas of the Earth that produced tsunamis). “If we could equip some fraction of the shipping fleet with high-accuracy GPS and satellite communications, we could construct a dense, low-cost tsunami sensing network that would improve our detection and predictions of tsunamis — saving lives and money,” Foster commented. Foster and co-authors estimate that this sort of ship-based system would have been able to detect the 2004 Indian Ocean tsunami within an hour, potentially save thousands of lives.

Foster and fellow SOEST researchers plan to deploy a demonstration system which will stream GPS data from one or two ships, thus generating accurate real-time heights and confirming that this approach can achieve the accuracy needed for tsunami detection. As a bonus, the same processing system will generate data that meteorologists can use to improve weather forecasts.