HAWAII: The number of Hawaiian monk seal hooking incidents is on pace to more than double lasts years amount, according to numbers shared by the Department of Land and Natural Resources on Friday. Thats why the DLNR and the NOAA Fisheries Service are asking for the kokua of local fishermen in this media release: The […]

HAWAII: The number of Hawaiian monk seal hooking incidents is on pace to more than double lasts years amount, according to numbers shared by the Department of Land and Natural Resources on Friday. 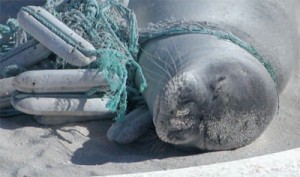 Image from NOAA's Guidelines for Prevention, Safety and Reporting

Thats why the DLNR and the NOAA Fisheries Service are asking for the kokua of local fishermen in this media release:

The Department of Land and Natural Resources (DLNR) and NOAA Fisheries announced this week that since March 2012, NOAA Fisheries, DLNR, and partners have responded to five seal hooking incidents involving four individual Hawaiian monk seals. Three of these responses are still in progress.

NOAA and DLNR would like to take this opportunity to remind fishermen that monk seal deaths and injuries from fishing interactions can often be prevented, and adverse impacts to fishermen and seals can be reduced through early reporting of incidents.

“Monk seals are a vital part of Hawai‘i’s marine and cultural environment,” said William J. Aila, Jr., DLNR Chairperson. “While DLNR and NOAA seek to address all adverse impacts on Hawaiian monk seals, we want to acknowledge the cooperation of Hawai‘i fishermen and emphasize that we do not consider fishing interactions in the main Hawaiian Islands to currently pose a major threat to monk seal recovery.”

NOAA Fisheries Service data indicate that a total of 77 hooking incidents have been reported over the past 10 years, with at total of nine incidents in 2011 and eight incidents reported thus far in 2012 (including the five incidents discussed here).

“However, in only two cases, including one of the recent cases, have hookings been deemed the likely cause of a seal’s death,” Aila added. “We want to partner with the fishermen to further reduce impacts. Following the guidelines and reporting hookings can help make a relatively small impact become even smaller.”

The agencies offer guidelines, titled “Hawaiian Monk Seals and Fishing Interactions: Guidelines for Prevention, Safety and Reporting,” that describe actions fishermen can take to avoid seal hookings and entanglement, and to reduce fishing gear and bait loss. The guidelines also stress the importance of reporting all fishing interactions.
The guidelines are available at the following link. The toll-free, 24/7 reporting hotline for all fishing interactions and other marine mammal incidents is: 1-888-256-9840. NOAA and DLNR urge all fishermen and other ocean users to write down this hotline and/or save it in their mobile phones for timely use whenever a seal is hooked or entangled.

“We want to encourage reporting as early as possible. We feel we can develop win-win solutions with the fishermen, and their reporting is essential to achieving this,” said Jeff Walters, Marine Mammal Branch Chief, NOAA NMFS PIRO.

1. First, reporting an interaction as soon as possible can help save a seal’s life or minimize seal injury. In at least three previous cases, real-time reporting of seals that had ingested hooks resulted in successful treatment and release of the seal back to the wild. These seals probably would have died without this intervention. On numerous other occasions, fishermen have provided timely reporting of less severe hooking and entanglements that were not immediately life-threatening, but could have become life-threatening if not responded to. These timely reports have allowed response network members to get out to the location in time to locate the seal and safely remove the gear.

2. The second benefit to timely reporting is that it helps federal and state managers and researchers better understand how fishery interactions occur and thereby helps guide the development and testing of improved methods to prevent and mitigate interactions. By reporting and documenting interactions, fishermen can partner with NOAA and DLNR to find better non-regulatory methods to effectively keep seals away from fishing gear and fishing areas, while also allowing for monk seal conservation and recovery.

Of the three active hooking cases, two seals required procedures to remove the hooks on May 10, 2012, at the Honolulu Zoo. One of these seals was airlifted from Kaua‘i to O‘ahu on May 9, 2012, by the US Coast Guard. The two seals are currently in guarded but stable condition at the Waikiki Aquarium. A special team has been assembled to de-hook and care for these seals, including a veterinarian flown in from the Vancouver Aquarium who specializes in marine mammal anesthesia.

The third hooked seal, last seen on May 9, 2012, around O‘ahu, has yet to be treated, but NOAA and DLNR marine mammal response staff are tracking her and plan to capture and treat her as soon as possible. This is the second hooking incident in the past two weeks for this seal, a 9-month-old female, known to response volunteers as “Kaiwi.” With her previous hooking on May 5, 2012, she was captured on Rabbit Island, de-hooked at Waikiki Aquarium, and released back into the wild the same day.

In March 2012, an adult male seal was found dead on Kaua‘i. A hook was found in the seal’s esophagus and necropsy results indicated that the seal likely died from trauma caused by the hook. The other three hookings reported thus far in 2012 were relatively minor and de-hooked on their own or removed in the field by marine mammal response staff.