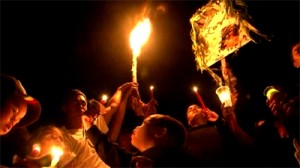 Lactaoen and Pactol were killed in a two-vehicle crash at the intersection of Queen Kaʻahumanu Highway and Kawaihae Road in South Kohala around midnight, early on Sunday morning.

31-year-old Rapozo died in an April 4 crash while riding his motorcycle on Route 190 near the 14-mile marker in the South Kohala District.

The gathering was also a chance for friends and family to express their greif over the incidents that have rocked the community. Councilman Dominic Yagong speaks in this video.