The UK Infrared Telescope (UKIRT) in Hawaii is helping an international team of astronomers advance the understanding of brown dwarf and giant planet detection. 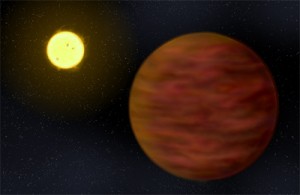 This artist’s impression shows BD+01 2920B in the foreground (on the right hand side), with its host star in the background. The colour and banded atmosphere of the brown dwarf result from atmospheric gases and turbulence (click the image for a high-resolution version). Credit: J. Pinfield, for the RoPACS network at the University of Hertfordshire.

The following media release is from the Royal Astronomical Society:

An international team of astronomers led by David Pinfield of the University of Hertfordshire has found a brown dwarf that is more than 99% hydrogen and helium. Described as ultra-cool, it has a temperature of just 400 degrees Celsius and its discovery could be a key step forward in helping astronomers distinguish between brown dwarfs and giant planets. The researchers publish their work in the journal Monthly Notices of the Royal Astronomical Society.

Brown dwarfs are star-like objects with insufficient mass to ignite hydrogen fusion in their cores. Over time they cool to temperatures of just a few hundred degrees. Formed like stars from the collapse of a giant molecular cloud a few hundred light years across, brown dwarfs in binary systems such as this have the same atmospheric chemistry as their host star.

In contrast, giant planets form with a more diverse chemistry. Those in our own solar system first formed as large solid cores, which then accreted gas from the disk around them. This led to a different chemistry in their outer layers. For example, when the Galileo spacecraft entered Jupiter’s atmosphere in 1995, it found the proportion of heavier elements (astronomers call these ‘metals’) to be three times higher than in the Sun. Such differences allow astronomers to discriminate between planets and brown dwarfs and reveal their formation mechanisms.

Dr Pinfield and his team detected the brown dwarf using data from the Wide-field Infrared Explorer (WISE) satellite, the UK Infrared Telescope (UKIRT) in Hawaii and the Visible and Infrared Survey Telescope for Astronomy (VISTA) in Chile. He carried out this work as part of his European (FP7) Initial Training Network RoPACS which studies planets around cool stars.

The newly discovered object, known as BD+01 2920B, is about 35 times more massive than Jupiter. It orbits its host star at a distance of 390 billion km or about 2600 times the average distance from the Earth to the Sun.

Searches for planets around other stars find many possible planets through the gravitational pull of the candidate objects on the stars they orbit as well as direct imaging using the latest (and future) optical technology on the largest telescopes. The problem is that compact brown dwarfs share many characteristics with giant planets, so astronomers struggle to confirm the nature of what they detect.

The new work has been made possible by combining data from ground- and space-based surveys, says Dr Pinfield. “Surveys from telescopes like VISTA and UKIRT and orbiting observatories like WISE are giving us an unprecedented view of ‘ultra-cool’ bodies in our neighbourhood.”

‘By finding these rare objects in orbit around nearby stars, we get a handle on the bigger picture; that we live in a galaxy where both giant planets and brown dwarfs are commonplace.”

The UKIRT Infrared Deep Sky Survey observes the near infrared northern sky (just beyond the wavelength range of the human eye) using the UK Infrared Telescope and its wide-field camera atop Mauna Kea on Hawaii Island.