Bill 256 redefines the geothermal relocation and community benefits program, with an emphasis on helping residents wishing to put distance between themselves and the Puna Geothermal Venture energy producer. 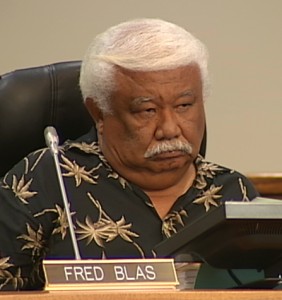 Puna councilman Fred Blas hears it from the public

HILO, Hawaii: It was a full day of Hawaii County Council Committee meetings in Hilo on Wednesday.

The highlight of the many measures discussed was Bill 256, dealing with the geothermal royalties paid to the county by the Puna Geothermal Venture. Introduced by Council Chair Dominic Yagong, the bill redefines the geothermal relocation and community benefits program, with an emphasis on the safety of the residents wishing to put distance between themselves and the energy producer.

There has been resurgent opposition to geothermal development as of late, coming mostly from the people in Puna who live with the industry in their backyard and suffer what they believe are illness and stress directly related to geothermal. Many of the residents of the neighboring Lani Puna subdivision want to take advantage of the relocation program, funded by the royalties… but because of how the law is written, they are ineligible for relocation.

A few years ago, the council voted to alter the language of the program, allowing funds to go towards public projects around Puna. Councilmembers apologized for the vote under today’s circumstances. The amended bill was given a positive recommendation by the Agriculture, Water & Energy Sustainability Committee, and generated hours of public testimony.

Bill 256 was was not without concern. First, there was some confusion about how much money is in the fund, after which it became apparent that some appreciated programs like the remote streaming from Pahoa and the security at Pohoiki and the Pahoa Community Center would have to find other sources of funding.

Some council members wondered if the massive buyout would create a sort of ghost town, and social problems like squatters or drug houses. And at a 130% assessed value buy-out rate, Planning Director Bobby Jean Leithead-Todd also warned of folks trying to make a buck in a down housing market.

And there were still some councilmembers who said they wanted to see the community benefits remain an option for the royalty. Councilman Yagong said that the measure can always be amended going forward…

One of the testifiers on Wednesday was Mike Kaleikini, manager of the Puna Geothermal Venture powerplant, who said the company was neutral on the bill.

While he was there, councilmembers took the opportunity to grill Kaleikini on a few controversial geothermal topics making headlines recently, like the lifting of environmental impact statement requirements, and the rumors that PGV is finding magma inside wells.

But the lightning rod for criticism on Wednesday was Puna councilman Fred Blas, who has supported keeping the relocation fund as is, and has generally stood in support of Puna’s geothermal industry, even in the face of the strong opposition…

Blas even made a statement of his own, however when it came to how he would vote, or why, he had nothing to say… even after fellow councilmembers asked to hear where he stood. It was a question that would be answered at roll call. Blas joined Hilo councilmembers Donald Ikeda and Fresh Onishi in voting “no”.

The bill will now go to the full council.