The impressive spattering at the summit of Kilauea volcano continues... This video shows how the western margin of the lava lake at Halema`uma`u appeared on Wednesday.

This video shows how the western margin of the lava lake at Halema`uma`u appeared on Wednesday.

The continuous spattering is often punctuated by bursts which throw lava onto the ledge on the left, and this accumulating lava is building a spatter rampart. If you focus on the right portion of the image, you can see the slow migration of the lava lake surface crust towards the spatter source, where lava sinks back into the magmatic system. 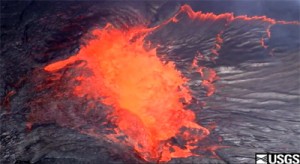 Hawaiian Volcano Observatory scientists say a laser rangefinder measurement taken on Wednesday put the lava lake at 210 feet below the floor of Halema`uma`u Crater – among the highest levels measured for the lake. Scientists say the lava rose slightly above this level briefly around 9 pm Wednesday night, spilling over the deep inner ledge, during a rise/fall event.

You can always check in with the USGS Hawaiian Volcano Observatory at this web address for all the latest on Kilauea.