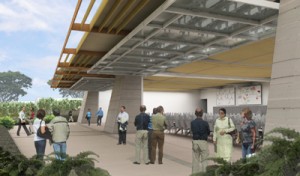 College of Pharmacy rendering, by WCIT and UH-Hilo

HILO, Hawaii: On Tuesday, Governor Neil Abercrombie announced a Project Labor Agreement plan to ensure efficient and timely completion to various State construction projects, and one of them is the highly anticipated UH-Hilo College of Pharmacy building.

The university has attached a very high priority to the $38 million project, which will include classrooms for new pharmacists and research labs for the discovery and synthesis of new drug entities. The Honolulu-based firm WCIT is the lead architect and has completed more than half of the design. Waiakea grad Robert Iopa as president and principal of the company.

By Administrative Directive, Governor Abercrombie declared that the State of Hawaii will use PLAs on a variety of construction projects in order to address obstacles that might arise due to a lack of labor coordination.

From a state news release:

“A Project Labor Agreement provides a mechanism for collaboration on certain projects to prevent potential conflicts among labor unions,” said Governor Abercrombie. “Our local economy has shown signs of improvement, but we cannot afford to lose this momentum by prolonging projects from getting done in a timely manner.”

Building Trades Council President Reginald Castanares, Jr. stated, “We’re grateful that the Abercrombie Administration is supportive of the working men and women of Hawai’i. The Governor’s Directive speaks volumes to his desire to create jobs and work on necessary projects that will benefit the State.”

Labor unions and employers that work on these projects will enter into a PLA when the contract is awarded, says the state.