Uncle Sam Kaleleiki says he was as surprised as anyone to see HB 2848 SD 2 pass the 2012 Hawaii State legislature. 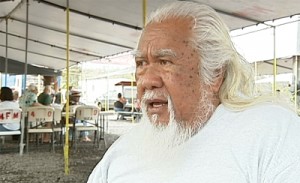 MAKU’U, Hawaii: A fundraising ho’olaulea  benefiting the effort to create a pu’uhonua and Hawaiian healing center on the Big Island as an alternative to prison was held on Saturday.

Ohana ho’opakele was the host for the event, which brought live music and good food to Makuu Farmer Market. Uncle Sam Kaleleiki said shame if you missed it, and told us he was as surprised as anyone to see House Bill 2848 Senate Draft 2 pass the 2012 Hawaii State legislature. The measure, which requires Department of Public Safety to plan for a model wellness center that employs native Hawaiian cultural practices on state land, is now before Governor Neil Abercrombie, and awaits his signature to become law.

Still, Kaleleiki is skeptical about what the final effort will look like, even if the law is passed.

The bill mentions the site of the old Kulani Correctional Facility is a possible candidate for the location.