HONOLII, Hawaii: The state’s investigation into last September’s fatal zipline accident in Pauka’a that claimed the life of one employee of GoZip LLC and seriously injured another, has been completed. Hawaii Occupational Safety and Health, a division of the State Department of Labor & Industrial Relations, has concluded that, “the tower collapsed because the soil […] 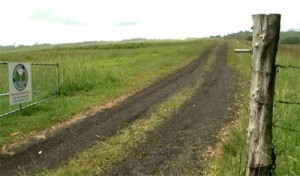 FILE: The gate at Honolii Mountain Outpost, the day of the fatal accident

HONOLII, Hawaii: The state’s investigation into last September’s fatal zipline accident in Pauka’a that claimed the life of one employee of GoZip LLC and seriously injured another, has been completed.

Hawaii Occupational Safety and Health, a division of the State Department of Labor & Industrial Relations, has concluded that, “the tower collapsed because the soil in which the ground anchors were installed failed to withstand the load from the tower, cables and rider.”

Also, the division said in a media release that “GoZip failed to take reasonable precautions to assure that the anchors could support the load.”

36-year-old Ted Callaway from Maui died, and 43 year old Curtis Wright of Ohio was critically injured in the accident that happened on the morning of September 21. The men were contractors with the Maui-based professional zipline building company, Go-Zip, which operates under the name Experiential Resources Inc. They were setting up the lines for Lava Hotline and the Kapohokine Adventures tour company, near Pauka’a about four miles up the Honoli’i Stream, at a new course at the time, called Honolii Mountain Outpost.

Some video was taken by blogger Damon Tucker on the Honolii Mountain Outpost Zipline months before the accident, in June 2011; it shows the view on line number 4.

KapohoKine Adventures co-owner Tony DeLellis announced the company was suspending all zipline bookings pending a full evaluation. We spoke to him a short time after the tragic accident.

According to a DLIR news release, the GoZip employees were adjusting and testing cables on Line 8, the longest leg of a zip line course that GoZip was building along the Honoli‘i Stream above Pauka‘a on the Island of Hawaii.

One employee was test riding the zip line and another was on the platform of a tower at the upper end of Line 8 when the ground anchors supporting the tower abruptly pulled out of the ground. The poles that held the platform came out of the ground and the tower collapsed, causing the cables to sag into the stream valley. The employee riding the zip line fell approximately 200’ and suffered fatal injuries. The employee on the platform fell approximately 30’ and suffered serious injuries. A professional engineer hired by GoZip to conduct geotechnical testing following the accident concluded that the subsoil in which the anchors were installed was Pahala Ash, a fine particulate mineral that has the appearance of normal soil but loses up to 90% of its natural strength when disturbed. The engineering report stated that much of the soil along the Hamakua coast of Hawai‘i Island that appears to be red dirt might in fact be Pahala Ash.

In a troubling statement, the department added:

This raises serious concerns about the stability of structures that rely on ground anchors for support, including zip line towers at other locations on the island.

As far as Go Zip is concerned: The labor department says the company is a member of the Association for Challenge Course Technology – or ACCT – an organization that serves the zip line industry, and served on an ACCT committee that wrote standards for installing zip line courses.

The department says ACCT standards require that guy systems on zip line towers, including ground anchors, be capable of supporting two times the expected load. HIOSH found that GoZip did not use any objective methods to verify that the anchors it installed could support the weight of the towers, cables, and riders or that the guy system could meet the requirements of the ACCT standard.

“For zip line installers, this tragic accident demonstrates the importance of basing design and construction decisions on measurable objective information, for the safety of workers as well as the general public,” said DLIR Director Dwight Takamine in a media release. “Unfortunately, this is another workplace fatality that was preventable and we share the sorrow of the family, friends, co-workers and others affected by this incident.”

DLIR says it is proposing penalties in the amount of $13,500.

It also states that citations under contest by the employer include:

And in a statement issued later in the day on Tuesday, Kapoho Kine’s DeLellis said “It doesn’t change the tragic loss of a human life,” … “and it troubles us that more rigid standards weren’t applied to these lines by the builder”

Kapoho Kine says the entire course was redesigned and is being rebuilt by an accredited zipline builder. Platforms are being rebuilt, supports are being reinforced and every anchor has been replaced and is undergoing intensive testing.