KAILUA-KONA, Hawaii: The Kailua Village Business Improvement District reminds us that everyone loves a parade, especially one that honors the iconic King Kamehameha the Great. The annual parade on Alii Drive in Kailua Village will be Saturday, June 16th.

On Saturday, June 16, 2012, the King Kamehameha Day Celebration Parade in Kailua-Kona will feature more than 120 riders on horseback, plus marching units, decorated vehicles, floats, marching bands and the regal pa‘u riders on horseback representing the eight Hawaiian Islands. Rancher DeeDee Bertelmann is this year’s parade queen, riding in a mounted unit with her ohana from Pu‘uanahulu. Waimea cowboy Leabert Lindsey will be grand marshal, accompanied by the legendary Hapalakas musical group on horseback, playing guitars and singing their famous songs like “Hawaiian Cowboy.” Also riding in her own unit will be statewide wahine rodeo champion and 2012-13 Miss Rodeo Hawaii, Macy Loando, of Kona.

The Therapeutic Horsemanship of Hawaii’s Kona Program will feature a team of miniature horses in the parade. Additional entrants include a horse-drawn carriage made of koa and ‘ohia; Daughters of Hawaii equestrian unit; hula halau and more. After the parade, Grammy Award-winning artist Cyril Pahinui will perform live in a FREE concert at Courtyard King Kamehameha’s Kona Beach Hotel beginning at 12 noon. Also featured will be Na Hoku Hanohano Award-winner Darlene Ahuna, and the Big Island’s own Honoka‘a Jazz Band.

The concert and ho‘oulaule‘a will include a Hawaiian arts and crafts festival, historic photo displays, and awards presentations for parade participants. 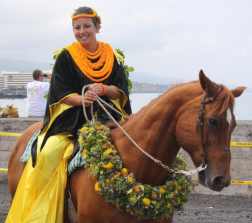 Everyone Loves a Parade!

The annual King Kamehameha Day Celebration Parade 2012 is set for Saturday, June 16 along Alii Drive in Historic Kailua Village. The parade, which honors the king who united the Hawaiian Islands, will feature nearly 100 horses, flower-laden floats, marching bands and hula halau. The eight main Hawaiian Islands will be represented by pau equestrian units bedecked in the colors and floras of each island.

Among the entrants, parade watchers will not want to miss the Daughters of Hawaii pau unit, which will be led by a horse-drawn carriage made of koa and ohia.

The parade begins near Royal Kona Resort at 9 a.m. and ends near West Hawaii Today. Festivities during the day include a Hawaiian Crafts and Music Festival in the ballroom and parking lot of the Courtyard by Marriott King Kamehameha’s Kona Beach Hotel from 8 a.m. until 3 p.m. with live entertainment, vendors and awards presentations.

Also on June 16 Halau Kala’akeakauikaweku will host their 3rd Annual Hoolaulea at Hale Halawai from 10 a.m. until 2 p.m. with food, crafts, cultural demonstrations, games for children and entertainment