UPDATE: As of 1 p.m., the Hawaii Police Department reports that Highway 11 north of Pahala is closed until further notice in both directions at the 49-mile marker because of the ongoing brush fire.

In a 1:45 p.m. fire dispatch, the fire department said there was active burning along Alii Springs Road and Higashi Camp Road in the Cane Haul Road Fire-Area. 3 units are assigned for confinement.

As far as the Highway 11 Fire Area goes: There is active burning to Kamehame Road moving toward the highway. The area is being suppressed with 4 units, who are responding to various flare ups within fire.

The fire department released this map of the fire to media, showing the locations of the two ongoing blazes. The town of Pahala remains sandwiched in between. 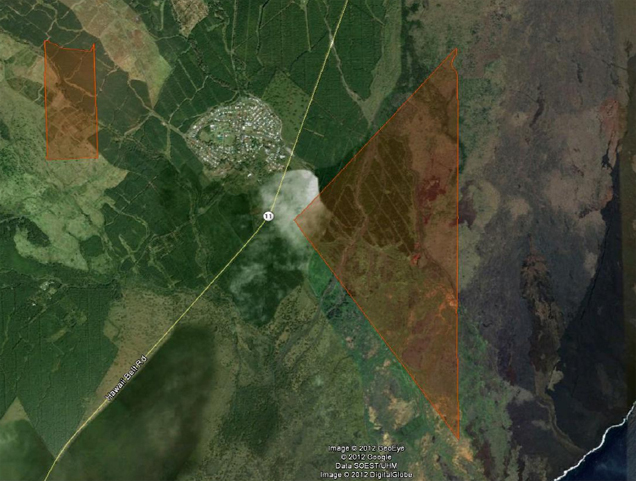 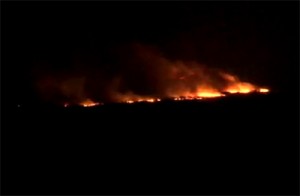 According to the Hawaii County Fire Department, one fire started inside of the Maunaloa Macnut orchard, and spread in a westerly direction, makai of the main highway, consuming about 500 acres at sundown.

2 choppers performed water drops on both fires, neither of which were contained as of Monday night. The entire area south of Pahala had dense smoke that traveled all the way to almost Ocean View.

Police closed Highway 11 at the 50 to 51 mile markers at Pahala because of the fire.

A fire dispatch details the fire battle in the lands mauka Pahala, described as a tree orchard, pastureland, and coffee farms:

Patients from Kau Hospital were evacuated to the Naalehu Community Center. Sources say the fire came close to the hospital, and ash that blew into the hospital will have to be cleaned before the patients can be moved back in, probably some time tomorrow or the next day.

The makai burning fire is threatening Punaluu. The man in the interview, Guy Enriques, former County Councilman, has a house at Punaluu. He talks about past years when similar fires threatened his home and he expects this fire to also threaten his home.