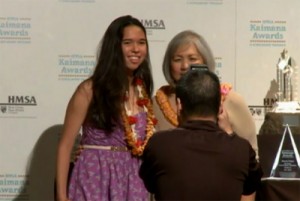 Three outstanding students from the Big Isle were honored with $3000 scholarships. They were Erin Carvalho of Kamehameha Hawaii, and Camille Ricketts and Trevor Yamagata of Konawaena High School.

Erin was recognized as a distinguished scholar and was given an additional $2000 scholarship.

As the top scoring high schools in the Big Island Interscholastic Federation, Waiakea High School and Hualalai both were given checks worth $1500.

More than 200 school principals, athletic directors, and student athletes and their family members from across the state gathered at the Hawaii Prince Hotel Waikiki to honor the state’s top high schools and finest scholar athletes