PAHALA, Hawaii: At the beginning of last week, two fast moving wildfires – fanned by gusting winds – burned through the brush on either side of Pahala Town, forcing the closure of roads, prompting evacuations, and blanketing the Ka’u region in smoke. Julia Neal is the publisher of the Ka’u Calendar, a monthly newspaper based out […] 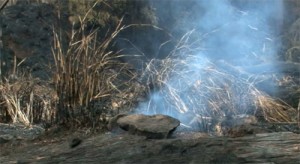 PAHALA, Hawaii: At the beginning of last week, two fast moving wildfires – fanned by gusting winds – burned through the brush on either side of Pahala Town, forcing the closure of roads, prompting evacuations, and blanketing the Ka’u region in smoke.

Julia Neal is the publisher of the Ka’u Calendar, a monthly newspaper based out of Pahala that reports on the events in the remote region of Ka’u. Neal also keeps the public updated through the Ka’u Calendar daily news blog. Her coverage of the fire – through photos, written updates, even audio reports – provided a thorough account of the event. She says for a time there was real concern in the town of Pahala.

Julia’s nephew, William, was visiting Ka’u for the summer from Miami. He helps Julia as an intern, and was with Julia when the fires started.

According to the Hawaii County Fire Department, one fire started inside of the Mauna Loa Macnut orchard, and spread in a westerly direction, makai of the main highway, consuming about 500 acres by sundown.

The entire area south of Pahala had dense smoke that traveled all the way to almost Ocean View.

Patients from Ka’u Hospital were evacuated to the Naalehu Community Center. The fire came close to the hospital, and the smoke was just too much for everyone inside.

On Friday, Julia guided the camera crew around the blackened areas of Pahala… much of it was still smoldering.

Conditions have been dry in Pahala for the past few years, but Neal says one of the biggest problems have been the gulches…

Now, things are starting to return to normal. The hospital is back online, and roads have been open now for a few days. Still, fire crews have not let their guard down.

Now, the residents of Pahala are wondering how this fire started?

On the night of the fire, former County councilman Guy Enriques was interviewed Monday night at a house in Punaluu.

Earlier in the day, Guy was running a volleyball practice for his Club, Southside Volleyball Club… as they prepare for a trip to the Junior National Volleyball Championship tournament in Dallas in two weeks. Enriques says the fires along this stretch of Ka’u are nothing new.

Indeed, in the summer of last year, this fire – one of three in the area of Punaluu – had Police asking for the public’s help in providing information.

Police said in a media release that the August 3, August 7 and August 8 fires, all located along Highway 11 in the area of the 55- and 56-mile markers, appeared to have been set intentionally.

While those fires were an inconvenience, these fires were damaging. The up and coming coffee industry in Ka’u was took a hit… some farms were directly affected.

Gloria Camba is the president of the Ka’u Coffee Growers Co-op.

She says about two thirds of her six acre farm have been destroyed. Luckily, Camba is being told that some of these trees will survive.

Things could have been worse… all agree the fire department did a great job. Still, Julia Neal reminds us that Pahala’s brush with wildfire comes at a great cost.