A moment over three years in the making – a short time when it comes to building roads in Hawaii – as the Kona community gathered to celebrate the opening of the Ane Keohokalole Highway. 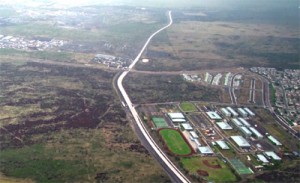 View of the Ane Keohokalole Highway, from above, courtesy Hawaii County

KAILUA-KONA, Hawaii: A moment over three years in the making – a short time when it comes to building roads in Hawaii – as the Kona community gathered to celebrate the opening of the Ane Keohokalole Highway.

Mayor Billy Kenoi joined the families of the Keahuolu, Kealakehe, Kaloko, and Honokohau areas, as well as the Keohokalole ohana, and about 300 members of the public for the opening on Saturday.

The 2.9 mile, $30.5 million highway opened later that afternoon following the noontime blessing, which included chants honoring the history of the area as well as Ane Keohokalole, the ali‘i for whom the road is named.

The highway runs parallel to and about a mile mauka of the Queen Ka‘ahumanu Highway from Palani Road to Hina Lani Street in Kaloko. It is named after the mother of Lili‘uokalani, the last monarch of the Hawaiian Kingdom. A large portion of the land for the highway was donated by the Queen Lili‘uokalani Trust.

The County’s Deputy Managing Director Wally Lau has been heavily involved with project since the beginning. He says this is the fastest county road he has ever seen constructed, taking only two years after breaking ground.

In this video, we present a closer look at that two year project timeline that Wally spoke of.

We will begin at the point in time when the Mid-Level road was just a nameless idea in the mind of officials… the perfect project for a local government looking to take advantage of the first big plan of the newly elected President of the United States, Barack Obama… and the first chance for a newly elected mayor of Hawaii County to make his mark. Kenoi said as much in a press conference held in January 2009.

The county wasted no time in identifying the project with the greatest need. Kona’s mid-level road would open up the Kealakehe area for the growth it expected to undergo in the next decade.

By June the county had set off to make the road a shovel ready project that would qualify for the American Reinvestment and Recovery Act of 2009… the environmental assessment was underway… and the road even had a name: the Ane Keohokalole Highway

You have to excuse Kona for initially being pessimistic about the project. So far, the highest profile highway project in Kona – the widenning of the Queen kaahumanu highway – had been a delayed boondoggle… and the second phase of the project was mired in a bid award challenges and Native Hawaiian consultation issues.

Nan, Incorportated had the winning bid for the project at $29.9 million.

In March 2010, the project broke ground… Tim Bryan had the report at that time…

Then in August of that year, the Ane Keohokalole Highway reached a milestone, as heavy equipment cleared the way to connect the three-mile thoroughfare to Palani Road.

Mayor Kenoi watched as the last 100 feet of non-native trees were grubbed – he even helped out himself – and the public got its first closeup glimpse of this project.

A year later, U.S. Sen. Daniel K. Inouye was on hand in Kona to tour portions of the nearly completed road.

Inouye also got to see the adjoining cultural interpretive center that is being funded as part of the highway project.

The $1 million interpretive center focuses on the culture of the ahupua‘a of Keahuolu through a 16th century farm, or kauhale. County officials say the center will be a repository for artifacts found in the area, and offer a quiet and private resting place for Native Hawaiian remains. The interpretive center in this culturally rich area is expected to be completed by the end of the year, and was designed by Kari Kimura, a Kona native who attended the Massachusetts Institute of Technology.

Then in February of this year… the administration had one more surprise to announce…the county would be will be able to complete an additional mile of the highly anticipated Highway, since so far the massive project has been on time and under budget.

Which brings us to the big event this past weekend… an intense two years of construction, and another year of heavy planning… culminating in a joyous celebration, as Kona now has its new highway.