This week's Volcano Watch article delves into the topic of geothermal development on Hawaii Island.

The Hawaiian Volcano Observatory has been somewhat quiet during the latest push for geothermal resource development.  This article does not endorse or oppose it, and it stays clear of hotly debated topics like community health, consumer cost benefit, or allotted royalties.

The article does urge caution, however, focusing on the island’s volcanic hazards, and the impact they could have on the potential energy boon to the Aloha State. 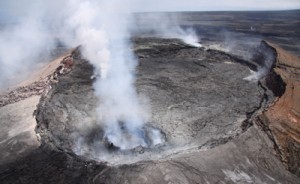 Can geothermal energy development be balanced with volcanic hazards in Hawai`i?

For decades, the State of Hawaii has been trying to reduce our dependence on fossil fuels. Energy from Hawai`i geothermal resources is but one of several alternate energy sources that have been explored.

In Hawai`i, geothermal resources depend on volcanic heat. Magma, stored in rift zones, heats groundwater which can be tapped by drilling. It is then pumped to the surface where its heat is extracted to drive electrical generators.

It makes sense that the most attractive geothermal target in the State of Hawaii is also the most active volcano—Kilauea. The nearly continuous supply of magma to Kilauea pumps heat into the geothermal resource, but it also fuels eruptions that could threaten structures on the volcano.

To make clear where future lava flows are most likely, Hawaiian Volcano Observatory (HVO) scientists published Lava-Flow Hazard Zone Maps as early as 1974, designating the summits and rift zones of Kilauea and Mauna Loa volcanoes as the most hazardous. For Kilauea, the summit and rift zones of the volcano also have the highest geothermal potential, so the Lava-Flow Hazard Map closely resembles the geothermal resource map.

Geothermal resources definitely exist on Kilauea, as established by the HGP-A pilot project in the 1970s. The Puna Geothermal Venture commercial power facility has produced 30 Megawatts (MW) from Kilauea’s heat, 20 percent of the annual electrical usage of the Island of Hawai`i, since 1993.

The most recent study in 2005 suggests that the potential of the Kilauea resource, excluding areas within national parks and state reserves, could be between 250 and 600 MW. Development of geothermal resources may also be possible on volcanoes with less frequent eruptions than Kilauea, such as Hualalai, Haleakala, or Mauna Kea.

If a resource of this size exists and is fully developed, the power generated from it would far exceed the need for electricity on the Island of Hawai`i. Therefore, the State of Hawaii is proposing the use of an undersea cable to link the islands between Hawai`i, the potential major energy producer, and O`ahu, the major energy consumer.

But what about the risk posed by volcanic eruptions? In a 1994 USGS publication (http://pubs.usgs.gov/of/1994/0553/report.pdf), HVO scientists estimated a high probability of eruptions from Kilauea’s lower east rift zone within any 50-year period. The publication also found a significant likelihood of lava inundation along the cable pathways linking the proposed Kilauea geothermal developments to the Honolulu energy grid, because the cable would have to pass across the northeast flank of Mauna Loa, Hawai`i’s other very active volcano.

These threats are real. In the last 200 years, eruptions have occurred three times in the lower east rift zone of Kilauea and six times on the northeast flank of Mauna Loa. The possibility of an eruption in the geothermal resource or state-wide cable path within any 50-year period is between 60 and 90 percent.

The effect of an eruption within a geothermal power development could be severe, and the site could be deeply buried by lava.

The power generated by the geothermal facility would be lost—possibly for weeks, months, or even years. The 1840, 1955, and 1960 eruptions in lower Puna continued for weeks to months. Power generation and transmission could not resume until after the eruption ceased, and it was safe to re-enter the area and re-establish the facilities and the cables carrying electricity away from the site.

With enough lead time before the eruption, however, much of the power-generation equipment might be moved offsite and saved for future use.

The effects of an eruption would be more profound as the geothermal power development increased in size. If a 500-MW power generation facility were developed within the lower east rift zone of Kilauea and power exported to O`ahu and Maui, a volcanic disruption would have state-wide effects.

As a community, we should explore all options in our quest for inexpensive, reliable electricity. There are down sides to the utilization of any energy source, and we must balance the negatives with the positives when making choices. This includes balancing the considerable benefits of geothermal resource development with the inherent volcanic risk of such development on active volcanoes.