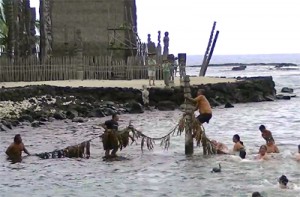 Thousands of visitors traveled to the sacred spot in South Kona, to enjoy the dozens of craft demonstrations, food, and cultural traditions, like the ho’okupu ceremony at Hale o Keawe. Or Sunday’s signature draw: the hukilau. Immediately after the corralling of the fish, everyone gathered together, singing “Hawaii Aloha”

Park Ranger Charles Hua was one of the participants in the fish gathering.

According to cultural demonstrator Charlie Grace, the hukilau – although rarely employed today – embodies the best in Hawaiian fishing practices.

All the fish were released, unharmed.

Both Grace and Hua say they have seen a changes in the fishery over the years, and discussed the needed management of West Hawaii waters.

Its a timely discussion. Right now, the State Department of Land and Natural Resources is getting ready to make changes to the laws governing the West Hawaii fishery, which stretches from Upolu Point at the north end of the island, all the way down to South Point. Meanwhile, residents living in Kaupulehu are considering a kapu on the fishery in that area.

[ VIDEO by David Corrigan, Hukilau footage courtesy the National Parks of the Pacific ]