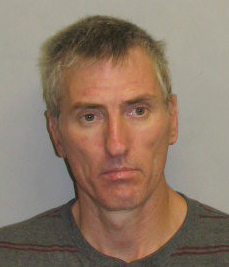 Detectives are investigating a reported shooting that occurred in Puna on Tuesday. (July 3, 2012)

Shortly after 5:30 pm, a 39 year-old Mountain View woman reported to police that at about 3:30 pm, she was at the suspect’s residence on Overview Road in Mountain View to retrieve her property. She said that she and the suspect were involved in a verbal confrontation. The victim reported to police that as she was leaving, she heard what sounded like a gunshot. She said as she turned towards the suspect, he allegedly pointed what appeared to be a firearm at her and discharged another round.

She said that she fled the area and reported the incident to police and was uninjured.

Police have classified the incident as a second degree attempted murder.

Detectives want to question James Gannon Coffey, 47 of Overview Road, who is described as a Caucasian male, 5’10” tall, weighing about 150 pounds, with hazel eyes and short graying hair. He may be operating a brown late model Toyota pickup truck. He is also wanted for an outstanding arrest warrant.

Police advise that Coffey may be armed and considered dangerous and not to contact Coffey, but to instead call police.

Police ask that anyone with information on this case or on the whereabouts of Coffey to call Detective Joel Field at 961-2381 or email him at jfield@co.hawaii.hi.us.