One of the most popular events along the Kohala Coast: the 23rd annual Turtle Independence Day at The Mauna Lani Bay Hotel & Bungalows 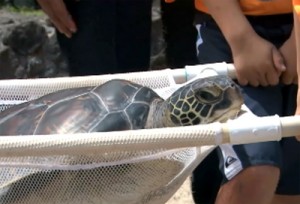 KOHALA COAST, Hawaii: One of the most popular events along the Kohala Coast: the 23rd annual Turtle Independence Day took place at The Mauna Lani Bay Hotel & Bungalows – a free community celebration that sees Hawaiian green sea turtles released into the freedom of the open ocean in the form of a traditional Hawaiian ceremony.

The Mauna Lani says the sea turtle – or honu – is the only indigenous reptile of Hawaii, evolving some 180 million years ago, and has become a significant symbol of the Islands.

Since 1989 Mauna Lani Bay has received 3 to 5 month old juvenile Honu from Oahu’s Sea Life Park and has raised them in the saltwater ponds of the resort.  The Honu are raised for 2‐3 years and attentively cared for until they grow to a size and weight that is classified as healthy for release into the ocean. More than 200 Honu have been released into the pristine waters in front of the resort since the program’s inception. While Turtle Independence Day is fun‐filled day for the whole family, it’s also an opportunity to raise awareness of the need to preserve and protect the Honu through education in the spirit of aloha.

As part of the day’s activities, guests also enjoyed an educational display about the Honu and a BBQ with classic July 4 fare showcasing Hawaii Island grown produce.