KAAWALOA, Hawaii: A tragic situation is unfolding at Ka’awaloa near Kealakekua Bay. One visiting 15-year old boy has been hospitalized and another 15-year old boy is missing following a public accident at the Ka’awaloa Light House on July 4th. The Coast Guard Hawaii identified the missing boy as Tyler Madoff of White Plains, New York. […] 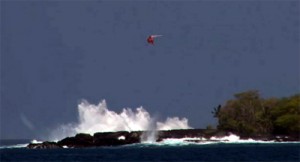 KAAWALOA, Hawaii: A tragic situation is unfolding at Ka’awaloa near Kealakekua Bay.

The Coast Guard Hawaii identified the missing boy as Tyler Madoff of White Plains, New York. The family of the missing boy, who was with a guided kayak tour while traveling in Hawaii, issued a statement to the media that they were “tremendously grateful for the support and prayers of our community but at this time request our privacy during this difficult time.”

County and Coast Guard helicopters searched from above, while watermen combed the sea looking for the missing boy.

Police say both boys were part of a youth tour group and were exploring tidal pools near the Captain Cook monument when a large wave surged into the tidal pool they were in.

A tour guide jumped into the water and was able to recover and resuscitate one of the boys. The guide was able to flag down a private boater who brought them back to Kealakekua Pier. When the group reassembled they discovered that the other boy was missing.

Witnesses to the scene were talking on Thursday.

Fire and Rescue crews and Coast Guard personnel are continuing to search the bay and surrounding areas for the missing boy.