HONOLULU, Hawaii: The governor marked the official end of the 2012 state lawmaking season in Hawaii, as he held one last ceremonial signing of some  traffic and safety bills. According to the governor’s office, of the 345 measures passed out of the 2012 Legislature, 329 are now law. Governor Neil Abercrombie signed 323 measures into law […] 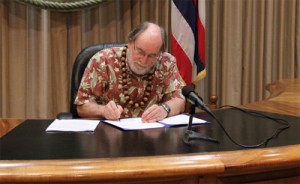 HONOLULU, Hawaii: The governor marked the official end of the 2012 state lawmaking season in Hawaii, as he held one last ceremonial signing of some  traffic and safety bills.

According to the governor’s office, of the 345 measures passed out of the 2012 Legislature, 329 are now law. Governor Neil Abercrombie signed 323 measures into law and vetoed 14. Six measures became law without the Governor’s signature.

“This was a very, very productive legislative session and one of the most positive in recent memory,” stated Governor Abercrombie. ”I’m very pleased to have signed off on a majority of the measures that passed out of the session and am grateful to those who worked to see them through.”

One of those laws that escaped a threatened veto at the hands of the governor was HB280, which creates a class C felony for false labeling and removes the requirement that all Hawai’i-grown green coffee beans shall be inspected and certified by the Department of Agriculture. The bill stirred passions in the coffee industry. Many smaller farmers – like those under the banner of the Kona Coffee Growers Association – wanted to see the bill get the ax, but other associations and larger companies urged the governor to approve the bill. The governor’s office let the bill become law without Governor Abercrombie’s signature, saying in a statement: “This bill marks the beginning for the Department of Agriculture to work with stakeholders and develop the framework for what is necessary to protect our state products.”

Thanks for all the help, but the Governor is allowing HB280 to go through. Allowing the compromise of Kona Coffee. Again big moneyed mainland business vs. small Kona farmers with their hands in the soil- guess who the Governor of Hawaii cares more about?

But Tuesday was not just about coffee. The governor’s office supplies this summary of the day:

Among the measures receiving final approval today were the following traffic and safety bills:

House Bill 1666, dubbed the “vulnerable user” bill, amends penalties for negligent homicide in the first and second degrees and negligent injury in the first degree when the incident involves a vulnerable highway user such as a bicyclist.

House Bill 2030, dubbed the “move over” bill, requires motorists to move over when passing a stationary emergency vehicle on a highway.

House Bill 2113 bans the ignition, possession, selling, offering for sale, or use of aerial luminaries.

House Bill 2626 permanently establishes the Safe Routes to School program within the Department of Education.

House Bill 2684 requires the Department of Transportation to conduct a feasibility study on the extension of the zipper lane westward from Waipahu towards Kapolei.

“These bills enforce safety awareness at different levels,” stated Governor Abercrombie. “There are families for whom these bills honor. What will come from these bills are reminders for all of us to pay attention and to have regard for each other. We must take a moment to realize what Hawai’i is all about and have a little aloha for one another.”

The following bills will become law without Governor Abercrombie’s signature:

House Bill 1868 (became law April 25, 2012) limits to retail basic exchange services the services for which a telecommunications carrier must obtain approval from the Public Utilities Commission to charge a rate higher than the filed tariff rate.

House Bill 2078 requires any operator of a transient accommodation to designate a local contact residing on the same island as the transient accommodation, and requires that all advertisements and solicitations on websites for transient accommodations display registration identification numbers. This bill is being enacted without signature in order to make it explicitly clear that the law is not intended to subject condominium associations to penalties for not providing information that it does not maintain or collect from its owners.

House Bill 2320 clarifies recommendations of the ignition interlock implementation task force. This allows repeat intoxicated drivers to install ignition interlock devices in their vehicles in order to be able to drive again. Governor Abercrombie supports efforts to include as many identified and impaired drivers as possible in an effective ignition interlock program, which this law attempts to do. However, he will be asking the Legislature to amend this law in the next session to provide for stricter monitoring and supervision of repeat offenders.

House Bill 2537 (became law April 25, 2012) allows the Department of Human Services to disclose confidential records pursuant to a court order, after an in-camera review of the records by the court, upon a showing of good cause by the party seeking the release of the records.

Senate Bill 2341 authorizes, within an agricultural district, agricultural tourism activities, including overnight accommodations of 21 days or less. This bill allows vacation rentals on agricultural land. Governor Abercrombie will be asking the Legislature and the counties to review this new law and propose appropriate restrictions to prevent abuse.

On June 25, 2012, Governor Abercrombie notified the Legislature of his intent to veto 19 measures. During the past two weeks, the Governor heard from various legislators and stakeholders from both sides for and against those measures. The following 14 bills were vetoed:

House Bill 46 would have prohibited smoking in and around housing projects under the jurisdiction of the Hawai’i Public Housing Authority (HPHA), with an exception for designated smoking areas; and allowed for eviction upon a third violation of the smoking prohibition. HPHA currently has plans to gradually institute a smoking ban in public housing project.

House Bill 283 would have appropriate $196,000 from the agricultural loan revolving fund to a program to control and eradicate the coffee berry borer. Rather than use funds meant to help farmers who have trouble obtaining financing, the Department of Agriculture plans to use $200,000 of barrel tax funds in its commitment to eradicate the coffee berry borer and in order to meet the intent of this bill.

House Bill 1617 would have authorized the Board of Land and Natural Resources to extend commercial, hotel, resort and industrial leases for up to another 55 years when the lessee makes qualifying substantial improvements to the leased land. This would enable lessees to have exclusive control of a public property for up to 120 years.

House Bill 1671 would have amended the procurement process by imposing time limits on rendering administrative and judicial review decisions, limiting protests to those that are a minimum percentage of the contract value, and required posting of a protest bond. Another measure passed and enacted this session makes procurement reform.

House Bill 1984 would have required that all letterheads, documents, symbols and emblems of the State and other political subdivisions include accurate and appropriate Hawaiian names and language. Reason for veto: This bill is not implementable by the deadline as other statutory changes are necessary. Governor Abercrombie intends to make an effort to identify how best to make this language transition by bringing together a working group. In addition, he will declare February as Olelo Month, fulfilling another aspect of the bill.

House Bill 2436 would have established the chief information officer or that officer’s designee as the chair of the Information Privacy and Security Council. This measure is duplicative of Act 71.

Senate Bill 2101 (vetoed May 1, 2012) would have extended the general excise tax exclusion for amounts received by a managed care support contractor of the TRICARE program for the actual cost to third party health care providers.

Senate Bill 2158 would have required law enforcement agencies to accept cash bail, certified copies of pre-filed bail bonds, and original bail bonds when the court is closed, including nights, weekends and holidays. Practical realities render this bill impossible to implement.

Senate Bill 2214 would have allowed an arbitration panel, rather than the State Legislature, to have the final decision on contributions to the Hawai’i employer-union health benefits trust fund by the State and counties for a health benefits plan and group life insurance benefits for active public employees. As different arbitration panels produce their findings for different bargaining units, the distribution of EUTF ratios may be unequal, which has serious consequences for financial planning and implementation. Moreover, the State is committed to dealing with its unfunded liabilities.

Senate Bill 2424 would have added various requirements for the registration and regulation of professional employer organizations (PEOs) and authorized penalties for noncompliance. This bill is overly broad and will impose restrictions too difficult for all PEOs to comply with. In addition, the measure does not address licensing procedures.

Senate Bill 2640 would have allowed counties to permit the use of an otherwise authorized individual wastewater treatment system, except cesspools in a special management area, under certain circumstances. This measure presents public health concerns and does not move toward resolution of this issue.

Senate Bill 2946 would have extended until June 30, 2016, the increase in the rental motor vehicle surcharge tax to $7.50 per day. This measure does not achieve its original intent and will end up having a cost for residents who rent cars.