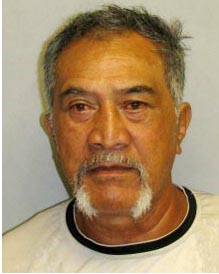 HILO, Hawaii: Big Island police have charged a 63-year-old Hilo man in connection with a confrontation on Friday that allegedly happened in a Hilo home.

Leong is known about town as “Coconut Joe” – weaving baskets and hats from coconut fronds for visitors in Hilo. We interviewd him in 2009 about his talents.

A 50 year old man living on Kūkūau Street told police the suspect entered the his home following a dispute, and while inside, allegedly assaulted the victim and a 21-year-old Hilo man. Neither victim sustained any injuries during the confrontation.