PAHOA, Hawaii: Puna had a chance to meet the candidates running for state office on Tuesday night in Pahoa. Malama o Puna – the grassroots environmental organization – traditionally holds these sort of forums around election time. A small crowd of interested residents came to the Pahoa Community Center to hear from state senate hopefuls […] 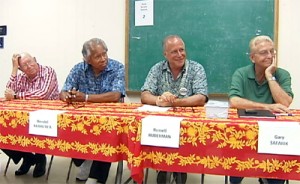 PAHOA, Hawaii: Puna had a chance to meet the candidates running for state office on Tuesday night in Pahoa.

A small crowd of interested residents came to the Pahoa Community Center to hear from state senate hopefuls for district 2 – that’s Puna and about half of Ka’u up to Punaluu – and the candidates for state house serving Puna.

Politicos have called this state senate race one of the tightest in the state – four well known personalities in the community are vying for the seat. There is no incumbent. State Senator Gil Kahele is now running for the Hilo seat – the new district 1 after the reapportionment process. That means District 2 is up for grabs.

The State Senate candidates in attendance: Bob Herkes, Wendell Ka’ehu’ae’a, Russell Ruderman and Gary Safarik. Another candidate and the sole Republican in the field, Daryl Lee Smith, was not in attendance.

The candidates for statehouse also introduced themselves. The district 4 incumbent – unaffected by the recent reapportionment – Faye Hanohano, and one of her challengers, Moke Stephens.

The third candidate in the race, Hope Louise Cermelj, was not present… organizers say she had a medical emergency.

Being a forum organized by an environmental organization, the first questions were asked by Malamo o Puna. Candidates were aked their position on GMO – genetically modifed organisms – which have played a big role in the large papaya industry operating in Puna.

Another question focused on the invasive albizia – the fast growing trees that seem to be taking over Puna – and topple in strong winds.

The last question from the organizers: what do the candidates think of a possible undersea cable, linking the Big Island to Oahu in order to provide them with locally produced power. Governor Neil Abercrombie recently signed Senate Bill 2785 into law, which establishes a regulatory structure for laying an interisland high-voltage electric transmission cable system.

The primary election will be on August 11th.