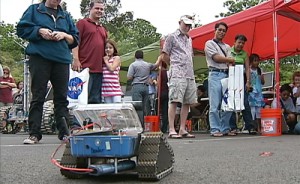 NASA rovers on display at Imiloa in Hilo

HILO, Hawaii: This Saturday, visitors to ‘Imiloa Astronomy Center in Hilo were able to get up close to the machines that will pave the way for humans to colonize outer space…. some of NASA’s futuristic lunar rovers were the main attraction in Imiloa’s busy rear parking lot.

This week wrapped up NASA’s return to the slopes of Mauna Kea in preparation for future space exploration. Big Island Video news has joined these same scientists on past missions to Mauna Kea, where machines dug in, hoping to produce oxygen from dirt.

He says after years of work, scientists say they have been able to prove the machines will work.

Some of those machines – like the star of show, RESOLVE – which stands for the Regolith & Environment Science and Oxygen & Lunar Volatile Extraction – were there to meet their fans closer to sea level in Hilo on Saturday. Some even had a chance to try their hand at controlling the rovers.

Hawaii has a hot commodity for these scientists. The island’s soil is most like that found on the volcanic plains of the moon or even Mars. That means the Big Island has an important role to play in planning the next mission to the moon… a mission that will most likely be carried out by private dollars.

Its this sort of huge investment that Hawaii plans to cater to with the PISCES program… Recently, PISCES was transferred from under the domain of the University of Hawaii-Hilo to the state Department of Business, Economic Development, and Tourism’s Office of Aerospace Development. Hamilton says thats a good thing.

The transfer almost didnt happen. It was thanks, in part, to Hilo County Councilman Dennis “Fresh” Onishi who helped get the legislature to act.

Onishi was on hand when Governor Neil Abercrombie signed HB 2873 into law. Now, PISCES looks towards the next mission – here on Earth – that will help get man to the next phase of life – in outer space.