University plans to drill for water beneath Mauna Kea

MAUNA KEA, Hawaii: The University of Hawaii plans to drill into the earth at two of three prospective locations within the Humu’ula Saddle region of Hawaii Island, in order conduct a detailed hydrologic assessment of the process occurring inside the Big Island. UH is preparing a Draft Environmental Assessment for the study, which has been […] 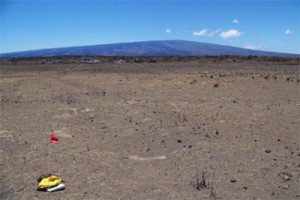 MAUNA KEA, Hawaii: The University of Hawaii plans to drill into the earth at two of three prospective locations within the Humu’ula Saddle region of Hawaii Island, in order conduct a detailed hydrologic assessment of the process occurring inside the Big Island.

UH is preparing a Draft Environmental Assessment for the study, which has been published by the state online.

According to the document, the research work will be funded by the Cooperative Ecosystems Studies Unit Network administered by the Army Corps of Engineers.

Scientists believe large volumes of freshwater have accumulated in Mauna Kea’s freshwater aquifer, hundreds of meters below the surface.

However, evidence of groundwater as high up as 1000 meters above sea level along the saddle shows that our understanding of Hawaii Island’s hydrology is far from complete. The document says in order to better manage the Island’s groundwater resources, further investigation and evaluation of the Big Islands hydrology is warranted.

The draft EA maps out the possible drilling locations. Here are some interesting excerpts from the document, which will now be commented on and revised before being finalized.

Overview and Background
In 1993 the Hawai‘i Scientific Drilling Project completed a research borehole near Hawai‘i Islands shoreline, in Hilo, that encountered an artesian groundwater aquifer more than 300 meters (m) (>1000) below sea level. Prior to this event, published scientific literature discounted the likelihood of artesian water being present on Hawai‘i Island due to the extreme permeability of Hawai‘i’s subaerial lava flows and the absence of carbonate caprock formations that have been found to host artesian aquifers on the island of Oahu. Hilo’s artesian aquifer was found to extend over more than 100 m (>330) of hole depth and to be confined by a sequence of soil and ash layers that marked the transition from Mauna Loa lava flows to those of Mauna Kea. The isotopic composition of the artesian water showed that it was derived from rainfall that entered Mauna Kea at an elevation of more than 2000 m above mean sea level (amsl). The presence of artesian water at these depths was attributed to a freshwater head, within Mauna Kea’s basal lens, of at least 8 m (25) above sea level being able to force basal freshwater to flow below the confining ash layers and out to the ocean as submarine springs (Thomas and Pailet, 1996).

A subsequent research drilling effort, located about 2 kilometers (km) inland from the initial borehole location again encountered an artesian aquifer at approximately the same depth, again confined by the soil and ash layers marking the interface between Mauna Loa lava and Mauna Kea lava flows. More striking, however, was that additional artesian freshwater aquifers were encountered at depths ranging from 2000 m to more than 3000 m below sea level. This finding indicated that much larger volumes of freshwater were accumulated in Mauna Kea’s freshwater lens than present models would forecast.

In order to test this hypothesis, University scientists teamed with the U.S. Geological Survey to conduct a series of geophysical surveys across the Humu‘ula Saddle from an elevation of ~600 m amsl, on the eastern end of the Saddle, to the Māmalahoa Hwy. on the western end of the Saddle (Figure 1-1). The results of these surveys (Figure 1-2) provided evidence that freshwater-saturated basalts (i.e. groundwater levels) may be present at elevations of more than 1000 m above sea level at some locations within the region. The presence of groundwater at these elevations would then suggest that our understanding of Hawai‘i Island’s hydrology is far from complete and that, in order to better manage the Island’s groundwater resources, further investigation and evaluation of the Big Islands hydrology is warranted. The proposed test holes, to be located at two of three prospective sites located on land with the following designations: TMK 3-4-4-16-006 and TMK 3-4-4-16-007, owned by the U.S. Army, and TMK 3-4-4-16-005, owned by the State of Hawaii and leased to the U.S. Army. Test holes at these locations will provide fundamentally new information for a part of the island for which there is almost no existing hydrologic data and will significantly enhance our ability to effectively and sustainably manage our groundwater resources. 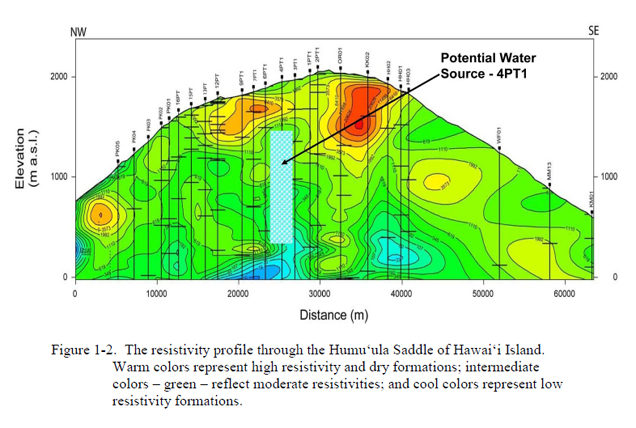 Purpose and Need of the Proposed Action
The purpose of the proposed action is to develop a better understanding of the groundwater system contained within Mauna Kea: to confirm the elevation of the water table within the Saddle region; to document the geologic structures overall as well as those that impact the groundwater system; and to conduct sampling and analysis of water samples in order to determine their source(s), their chemical compositions, and their ages/residence times in the Saddle aquifer(s).

A somewhat more focused need is driven by increasing use of the Humu‘ula Saddle region. Recent decades have seen a substantial increase in the use and “occupancy” of the higher elevation areas of both Mauna Loa and Mauna Kea. Among the more visible activities is the development of state-of-the-art international astronomical facilities at the summit of Mauna Kea, along with a public visitor center and temporary lodging for scientific staff at lower elevations. Less visible has been the increased public use of the Saddle region for recreational activities (e.g. hunting, hiking, nature photography) brought about by improvements in safety and ease of access arising from the Saddle Road improvements. Ongoing training activities at the Pōhakuloa Training Area, as well as a desire for increased leasing activities on the Saddle lands managed by the Department of Hawaiian Home Lands (DHHL), and increased utilization of State parks along the Saddle Road corridor also contribute to current and future utilization of the region. Nearly all of these activities depend on the availability of potable water that, in most cases, must be trucked to the Saddle from Waimea or Hilo – an inefficient and expensive process that consumes a substantial quantity of our scarce liquid fuels. Although demand for a potable drinking water source within the Saddle region more than justifies the installation of a production well in the region, uncertainties about the depth to the resource and the quality of the water have made it difficult to justify the cost of drilling a production well.

The proposed hydrologic assessment and small diameter boreholes will enable us to provide a much more detailed understanding of the groundwater systems and the geologic structures that host those resources beneath the Humu‘ula Saddle and enable the agencies responsible for the regions lands: the Department of Land and Natural Resources, Division of Parks and Recreation, Commission on Water Resources Management, Division of Forestry and Wildlife; the University of Hawai‘i, Office of Mauna Kea Management; the Department of Hawaiian Home Lands; U.S. Army Garrison, Pōhakuloa (referred to, collectively, in the following discussion referred to as Stakeholders), to plan for, and manage, the lands under their jurisdiction and to manage the groundwater resources associated with those lands. 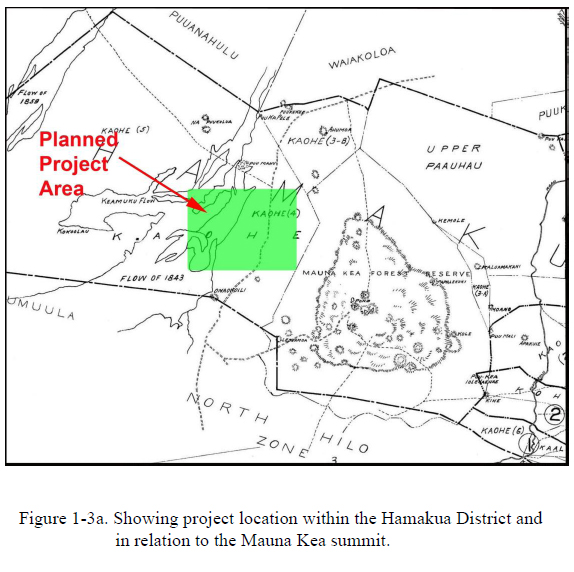 3.1.3 The Proposed Action
The proposed action will be the drilling of a borehole at Site I, above, and a second borehole at Site II or Site III depending on the results and interpretations resulting from the Site I drilling and analysis. Samples of rock core will be collected continuously during drilling and will be analyzed for structural information as the core is recovered. The diameter of the boreholes may be as large as 15.3 cm (6”) at the surface, but will be reduced to 9.7 cm (3.8”) diameter at depth; depending on formation conditions, the bottomhole diameter may be as small as 6.4 cm (2.5”).

During drilling, and subsequent to completion, water samples will be collected from the borehole and tested for chemical composition and other physical and chemical properties; analysis of the age of the water samples will be conducted to determine their average residence times in the aquifers within the Saddle region and isotopic analysis will enable us to determine at what altitude the recharge entered the hydrologic system.

The steps in conducting the drilling will consist of the following actions:

As borehole data are gathered regarding the formation fluids, a recommendation will be developed as to where a second exploratory borehole should be undertaken. The decision to undertake a second exploratory borehole will be based upon: the structural interpretation of the rock cores that are collected during drilling; depth to a stable water table; the quality of the water encountered in the first bore; and evidence regarding the recharge rate and sustainable yield of the water resources. The decision on which site will be selected will depend on the interpretation of the structural features as they relate to the screening criteria discussed in the Site Selection paragraphs above. At the selected site for the second borehole, the sequence of actions described above will be repeated.

At the conclusion of the groundwater analysis process, a determination will be made as to whether one or both of these observation holes would be useful for monitoring conditions in the identified aquifers and to monitor for changes in the aquifers as a result of global climate change; should such monitoring not appear to be feasible or useful, then the holes will be plugged and abandoned according to State Water Commission and Department of Health requirements.