KAPULENA, Hawaii: Hawaii County finally rolled out the Kapulena Agricultural Park – in the works since 2009 on 1,739 acres of fallow, county owned land between Honokaa and Waipio Valley – with an official blessing on Friday morning. [FMP poster=”https://www.bigislandvideonews.com/media/episodes/30/02kapulena.jpg” width=”280″ height=”153″]https://www.bigislandvideonews.com/media/episodes/30/02kapulena.mp4[/FMP] Cattle has been present on the land since the start of the year, […]

KAPULENA, Hawaii: Hawaii County finally rolled out the Kapulena Agricultural Park – in the works since 2009 on 1,739 acres of fallow, county owned land between Honokaa and Waipio Valley – with an official blessing on Friday morning.

Cattle has been present on the land since the start of the year, and Friday’s event represents the culmination of a concerted effort amongst various agencies to do right by the Hamakua lands, which were acquired by the county in lieu of taxes when the sugar industry collapsed. The process to get to this point was detailed in this Big Island Video News report in August 2010 (right).

As for Friday’s blessing, the Hawaii County office of the Mayor provides the video above as well as the media release below.

The County of Hawai‘i and the Hāmākua Farm Bureau today held a ceremony to bless the 1,739 acre Kapulena Agricultural Park, just northwest of Honoka‘a. A group of about 50 farmers, ranchers, officials from the County and State including Mayor Billy Kenoi, and members of the community gathered for the morning blessing by Deacon Larry Ignacio, born and raised in the area.

“This is one of the most excited projects that we’ve ever had the opportunity to work on. Its been a true privilege. We talk about cooperation and collaboration. We talk about agriculture and sustainability. There’s a lot of conversation, but we needed to have a meaningful project that was on the ground, where farmers could farm and ranchers could ranch,” Mayor Kenoi said. 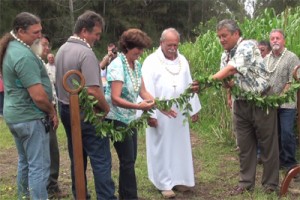 The first herd of cattle has been grazing the Kapulena lands since the beginning of 2012 in an effort to clear thick vegetation off the first increment of the fallow sugar cane lands, while simultaneously preparing the cattle for market. Once the lands are grazed down, they will be made available for more intensive farming projects proposed by the community.

“To have the largest agricultural park in the state of Hawai‘i be a County and community one is a very humbling, satisfying, and rewarding experience. Our job was to just remove obstacles, hurdles and barriers along the way,” said Mayor Kenoi.

While the grazing project will clear vegetation growing on the property for the initial group of farmers, the County has also entertained a number of offers from companies that wish to make use of ironwood trees which have taken over a majority of the property. Proposed uses for the ironwood include everything from flooring to fuel cells to biomass.

Other uses of the Kapulena lands could range from community gardens to larger-scale ranching and commercial production of crops to educational programs that will encourage youth to enter agricultural fields, Mayor Kenoi said.

The Kapulena Agriculture Park is operated by the Hāmākua Farm Bureau on a portion of the County-owned Kapulena lands just above the Hāmākua ditch between Honoka‘a and Waipi‘o Valley. Last year, the County worked with partners – including inmates from the Hawai‘i Community Correctional Center – to clear old cane haul roads and install fencing and gates for security to support grazing on this portion of the Kapulena lands.

In addition to the County of Hawai‘i and the Hāmākua Farm Bureau, participants in the Kapulena lands include University of Hawai‘i College of Tropical Agriculture and Human Resources, and the U.S. Department of Agriculture’s Natural Resources Conservation Service.

“To see collective energy result in a beneficial project that also is focused on growing the next generation of farmers, growing the next generation of ranchers, to have been a small part of that is something I’ll always remember,” Mayor Kenoi said. “We didn’t talk about agriculture or talk about sustainability but actually brought the community together to make it happen and getting it done is the most satisfying, rewarding part of the job.”