Video by David Corrigan | Voice of Stephanie Salazar HILO, Hawaii: Back and forth all day… Three sabini boats race in the waters of the scenic Wailoa State Park, the main event of the 2012 International Haari Boat Festival in Hilo. The event is hosted by Hui Okinawa, an international cultural organization promoting Okinawan culture […] 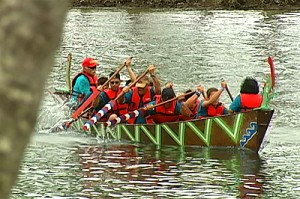 HILO, Hawaii: Back and forth all day… Three sabini boats race in the waters of the scenic Wailoa State Park, the main event of the 2012 International Haari Boat Festival in Hilo.

In the water, teams in three divisions compete, cooperating by rowing to the beat of a gong at the front of the boat.

On land… Japanese cultural clubs gather to enjoy the cultural demonstrations. And the food: Andagi, bento, and Okinawan Soba Noodles were in good supply.

Organizers say a lot of work goes into this day. With Hawaii already a hotbed of the paddling sports, the event seems like a perfect fit.

Okinawan culture is an important part of the island’s diversity. Some 25,000 men, women, and children left their impoverished Okinawan homeland between 1900 and 1924, hoping for a better life in Hawaii, according to the University of Hawaii Center for Oral Histories.

This event started when the Hawaii United Okinawa Association went to Okinawa on a study tour and paddled in the Itoman Haari Boat Race in 1986. That same year, the Hawaii County Council approved a sister city resolution between Nago City and Hawaii County.

It was later decided that Hilo should be the host city for a Haari Festival. James Arakaki went to Nago City and asked mayor Tetsuya Higa to donate three sabani boats for this festival. Mayor Higa said yes!

On January 9, 1990 the Kaiho maru entered Hilo Harbor and the next day Mayor Higa of Nago City made a special trip to present the three sabani boats to County of Hawaii Mayor Bernard Akana.

In May of 1990 the sabani boats were launched at Wailoa River and all Hui Okinawa members were invited to try it out. A few months later in August, the first Haari Boat race was held.

And so the event has continued, now held every other year in Hilo.

Of course, things tend to change slightly over the decades…

One difference this year… less political shirts and signs. In years past, the Haari Boat festival has been a showcase of candidates running for public office. But this year, with the primary held so early – the political hui’s have diminished.

All politics aside, the festival is truly an international affair. Among the honored guests, Japanese leaders from the Okinawa prefecture, like Kumejima Mayor Choko Taira.

Also on hand… the current day mayor of Nago, Susumu Inamine, who was present in Hilo back in 1990 when the sabani boats were delivered.

The competition has remained fun and friendly through the years on the Wailoa River… of course, that doesn’t mean things don’t get heated down the stretch of a close race.

Winners and losers aside, the festival continues to serve the island’s Japanese community with an authentic cultural connection to their roots, as well as those of their ancestors.