SOURCE: USGS Hawaiian Volcano Observatory FILED on Wednesday, August 29, 2012 8:24 AM HST  on HVO website Past 24 hours at Kilauea summit: The low lava lake level left the cavity walls unsupported and there have been several collapses of wall rock and parts of the inner ledge. Last night, there were two major collapses – the […]

Past 24 hours at Kilauea summit: The low lava lake level left the cavity walls unsupported and there have been several collapses of wall rock and parts of the inner ledge. Last night, there were two major collapses – the first at 11 pm took out a large chunk of the westernmost inner ledge and the second, 25 minutes later, removed a wide swath of the northeastern cavity wall above the ledge. Both rockfalls significantly disrupted the lake’s circulation which resumed a more normal pattern, from northwest to southeast, by 1:30 am this morning.

The summit tiltmeters recorded continued DI deflation with two noticeable inflationary offsets in response to the large rockfalls. The lava lake level was generally quite low and the near-midnight rockfalls occurred just after a long rise/fall event that started about 3:45 pm yesterday; another rise/fall event started just after the first and largest rockfall that continued through this morning. The most recent (preliminary) sulfur dioxide emission rate measurement was 700 tonnes/day on August 27, 2012; this value was a typical background level between rise/fall events. Small amounts of ash-sized tephra (spatter bits and Pele’s hair) were carried out of the vent in the gas plume and deposited on nearby surfaces.

Seismic tremor levels remained slightly elevated but varied with the changing activity of spattering lava sinks and rise/fall events within the lava lake. Nine earthquakes were strong enough to be located beneath Kilauea volcano: 4 within the southwest rift zone, 1 beneath Halema`uma`u Crater, 3 within the upper east rift zone, and 1 north of the middle east rift zone.

Past 24 hours at the middle east rift zone vents: The overall vigor of flows southeast of Pu`u `O`o remained weak when viewed through Webcams, with scattered flow activity on the coastal plain more than 2 km (1.2 mi) from the coast; if weather permits, we will move one of our webcams from the pali down to the coastal plain so that it will provide views of lava flows on the pali. The Kalapana Viewing Area crew have been occasionally reporting views of lava flows high on the pali consistent with the trend of activity moving slowly upslope over the past several months. There was no ocean entry.

Incandescence at Pu`u `O`o continued to be dominated by the two small pits on the crater floor. The long-lived northeastern one holds a small lava lake; the southern one must also hold a lava lake based on circumstantial evidence and we hope to get visual confirmation from HVO geologists on today’s overflight. The glowing spot at the base of the southeast flank of Pu`u `O`o, marking a collapse in the roof of the lava tube, was also bright. 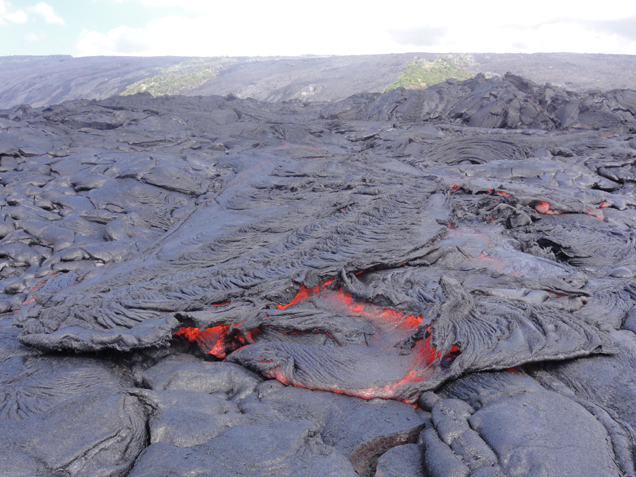 Surface flows remain active on the pali and coastal plain, but have not made significant progress towards the ocean. On today's field visit, the closest flows to the ocean were about 2 km (1.2 miles) from the water. This image shows a pāhoehoe breakout at the flow front, with a rigid ropy section of crust being carried forward by the flowing lava beneath it. In the background, the forested areas on the pali are some of the last remaining uncovered portions of Royal Gardens subdivision.