HONOLULU – Total expenditures by visitors who came to Hawai‘i in July 2012 rose 17.8 percent (or +$193.8 million) compared to the previous year to $1.28 billion, according to preliminary statistics released today by the Hawai‘i Tourism Authority. Higher daily spending and a 7.8 percent growth in total arrivals (to 720,355 visitors) contributed to this increase.

No visitors came to Hawai‘i by cruise ship in July 2012. 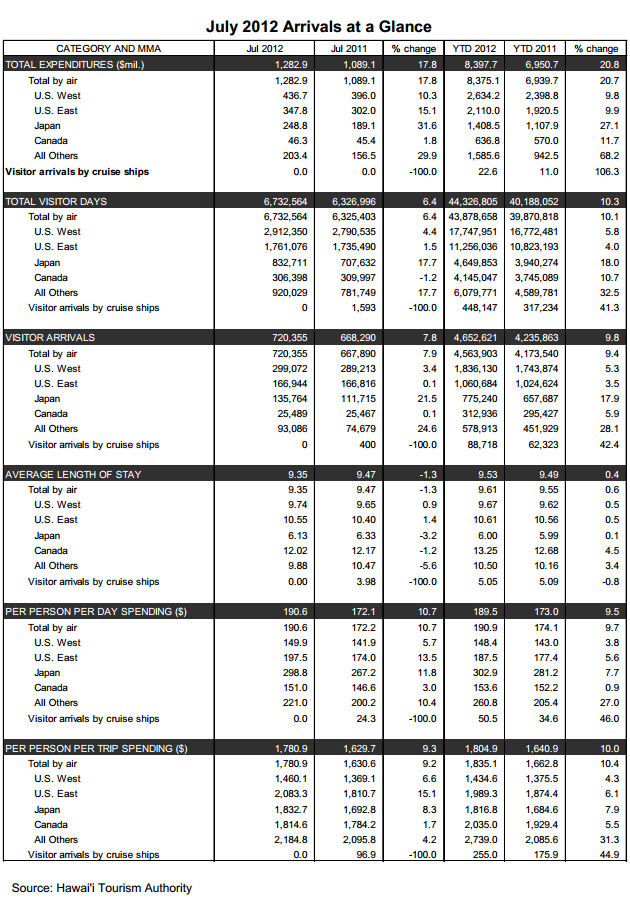 Hawai‘i’s tourism economy continues to be on pace for a record year through July as the state  welcomed 1,800 more visitors each day and an additional $17 dollars per person in daily spending compared to 2011. This activity has resulted in total visitor arrivals increasing 9.8  percent to 4.7 million visitors and total expenditures jumping 20.8 percent to $8.4 billion, up $1.4  billion from last year. Year-to-date visitor spending has generated an estimated $915 million in  state tax revenues and will help to sustain more than 160,000 Hawai‘i jobs in 2012.

We anticipate that the momentum from the positive increase in visitor arrivals and spending will  continue through the second half of the year. HTA’s ongoing efforts to lead global marketing  initiatives, invest in programs contributing to incremental and new airlift, and cultivate and  promote experiential activities and programs across the state has resulted in increasing visitors
arrivals and spending throughout the Hawaiian Islands.

As a result of these positive changes, last month, the HTA revised its targets upward for 2012- 2014 with arrivals and spending from U.S., Canada, Japan, Oceania and Europe outpacing  original targets set back in September 2011.

At the recent 2012 Hawai‘i Tourism Conference, E Ku i ka Moku, the HTA gathered more than  600 industry professionals in addition to local, national and international experts to develop  ideas and solutions to sustain Hawai‘i’s number one industry. The HTA is looking forward to  building upon this teamwork and economic momentum to mālama Hawai‘i, provide quality
experiences and support jobs for Hawai‘i residents.