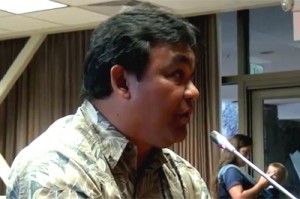 HILO, Hawaii: A shouting match broke out between County Council Chair Dominic Yagong and Board of Ethics Chairman John Dill, during an informal ethics hearing in Hilo on Wednesday.

This video was shot by RJ Hampton and shared with Big Island Video News. Hampton also testified during the hearing.

Yagong was on the hotseat after an anonymous complaint was forwarded to the ethics commission by the State Office of Elections, alleging the councilman may be inappropriately involved in the operations of the Hawai‘i County Elections Office.

As Council Chair, Yagong oversees the County Clerk as well as the Elections Division… but most of the questioning revolved around Yagong’s daughter, Chelsea, who is running for the County Council district 1 seat this election.

Yagong fired back with allegations of his own, saying Chairman Dill has his own conflict of interest.

Even County Clerk Jamae Kawauchi joined in the fray.

The board eventually decided to continue the discussion at a later meeting.

Also, a complaint involving District 5 Councilmember-elect Zendo Kern was heard in executive session. At issue is a  vote Kern made as chair of the Windward Planning Commission.

And another complaint about the news that County employees were allowed to attend union meetings, on county time, in which political campaigning took place. That matter will continue.

We will have an in depth report on this story on Friday.