Video By David Corrigan | Voice of Stephanie Salazar HILO, Hawaii: Hundreds packed the Hilo High School cafeteria on Friday night, in the hopes of weighing in on a federal study of Hawaii’s energy future. The scoping meeting was one of many held across the islands, and is the first step in the U.S. Department of Energy’s drafting […] 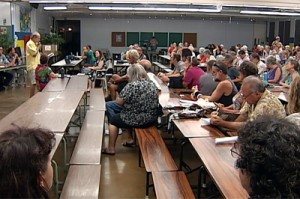 A packed meeting in Hilo for the DOE PEIS scoping

HILO, Hawaii: Hundreds packed the Hilo High School cafeteria on Friday night, in the hopes of weighing in on a federal study of Hawaii’s energy future.

The scoping meeting was one of many held across the islands, and is the first step in the U.S. Department of Energy’s drafting of a Programmatic Environmental Impact Statement for the Hawai`i Clean Energy Initiative.

It was a chance for these folks to let the feds know how they feel about the current plans to develop Hawaii sustainable energy resources.

Passions were deep… On numerous occasions, meeting facilitators had to remind the public about the purpose of this process.

But with so many possible resources to harness – geothermal, solar, wind, ocean – what is the best path to take?

The federal study hopes to develop the guidance that can be used in making those decisions. The study will look at Energy Efficiency, Distributed Renewables, Utility-Scale Renewables, Alternative Transportation Fuels and Modes, and Electrical Transmission and Distribution.

The EIS process actually began in December 2010, but back then it was focused on only the wind phase of the Hawaii Interisland Renewable Energy Program.

Today, there is a much wider scope for the environmental study, and a chance for residents in Puna who oppose geothermal development along the volcanic east rift zone to voice their opinion.

In the hopes that the final document would detail the cons of Hawaii’s geothermal industry, residents detailed the issues they have with Puna Geothermal Venture, which is currently tapping the island for 38 megawatts just outside Pahoa. One person even dressed up as the Grim Reaper to symbolize the general disgust in the plan to drill for more.

But it was also the possible transmission of power produced on the Big Island to Oahu that had the public in an uproar, particularly a proposal to lay an undersea, inter-island power cable in order to send energy off-island.

It wasn’t just geothermal getting the heat at the meeting. Testifier Elaine Munroe spoke out about concerns she has with bioenergy facilities like Hu Honua, which will soon be operating in Pepeekeo.

The Big Island isn’t the only county with issues… a few residents even flew over from Lanai in order to testify against a proposed wind project on their island.

Another testifier… Henry Curtis: the executive director of Life Of The Land, a non-profit environmental and community action group.

When he talks on the subject of energy, people listen.

One resident questioned… does all this even matter?

The Department Of Energy plans to issue the draft Programmatic EIS in 2013. That will begin a 45-day public comment period. Then there will be more public hearings.

Officials plan to publish the final Programmatic EIS in 2014.