Video by David Corrigan | Voice of Stephanie Salazar Editors note: there are two versions of this story, both taking different angles. In the video featured above, we delve into the back story of Hawaii County’s plan to handle a possible geothermal related emergency in Puna. Below, you will find a detailed look at the actual procedures, […]

Editors note: there are two versions of this story, both taking different angles. In the video featured above, we delve into the back story of Hawaii County’s plan to handle a possible geothermal related emergency in Puna. Below, you will find a detailed look at the actual procedures, detailed and shared with the public for the first time on September 15th. 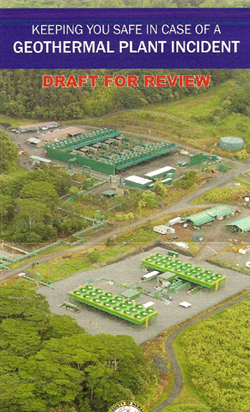 LEILANI ESTATES, Hawaii: A detailed evacuation protocol in case of a geothermal-related emergency was introduced to the residents of Leilani Estates on Saturday.

These pamphlets were handed out at the meeting, showing this color-coded advisory scale, and other information.

Battalion Chief Gerald Kosaki explained that there are two basic types of emergencies that could arise at the Puna Geothermal Plant, located within a mile of a large portion of the Leilani Estates subdivision. The first is a chemical spill. The second type is of greater concern to surrounding neighborhoods… a steam release containing Hydrogen Sulfide.

In the event an H2S release, the fire department will spring into action, using the alert level scale we posted below.

John Drummond with Hawaii County Civil Defense said the agency is ready to alert residents in case of emergency by way of telephone messaging.

Police also verified their role in the event of an evacuation. Assistant Chief Marshall Kanehailua was present to answer questions.

Mayor Kenoi also said that the county will be developing the framework for a health study; a framework that he says will be devoid of a political agenda because of how it will be developed. Peter Adler will be tapped to help the County develop the guidelines for the study. Kenoi says Adler specializes in finding consensus in contentious relationships.

The topic of a health study and evacuation plan certainly has been mired in politics over the last six or seven months.

When County Council Chair Dominic Yagong called a special council meeting on geothermal in Pahoa earlier this year, battle lines were drawn. Many residents living near the Puna Geothermal Venture plant outside Pahoa said they were suffering health effects because of the industry in their backyard. Opponents of geothermal were again ready to take a stand.

Yagong, who was also a challenger for the mayor’s seat up until his primary election loss, introduced two high profile bills dealing with geothermal energy at the county council.

On bill aimed to redefine the geothermal relocation and community benefits program, with an emphasis on the safety of the residents wishing to put distance between themselves and the energy producer. The bill also called for a health study.

The other bill would have ordered Civil Defense to create a specific emergency plan for the community located near geothermal industrial sites, which would include an evacuation drill. It appeared – at first – as if the administration was in support of the idea.

Public testimony was passionate. The bills passed the council, but were vetoed by the mayor, who did not see eye to eye with Yagong on the legislation.

At the same time, a large group of residents from Leilani Estates, many of whom were present for Saturday’s meeting, came forward with concerns about Yagong’s legislation.

The council tried to override the mayor’s veto, questioning Civil Defense Administrator Ben Fuauta on the sudden withdrawal of his support for the bill.

The veto override failed, leaving many Puna residents who are in opposition to geothermal heart broken.

The mayor’s rebuke has not been forgotten. Boos rained down on the Kenoi as he tried to testify during a scoping meeting related to the Hawai‘i Clean Energy Initiative in Hilo this past Friday.

Although Kenoi stood before a much more friendly crowd at Saturday’s Leilani Estates meeting, there were still some hard questions being asked.

Jon Olson has testified many times on the need for an official emergency plan. On Saturday, Olson had some more questions about the procedures being described by the administration. In particular, Olson said that national trends are backing away from using the utility as a technical advisor in times of crisis, following the BP oil disaster in the Gulf of Mexico. Kosaki said the County must use Puna Gothermal Venture as the technical advisor in case an incident were to occur.

Another resident wanted to know what the plans are for further geothermal development in the area?

The mayor assured the crowd that rumors of a thousand megawatt industry on Hawaii Island is not in the works. He said that along with the 38 megawatts already being produced by PGV, HELCO is looking into another 50 megawatts in a recent Request For Information. Kenoi said the RFI suggests that further development is more likely to occur in Kona, where the transmission needs exist. 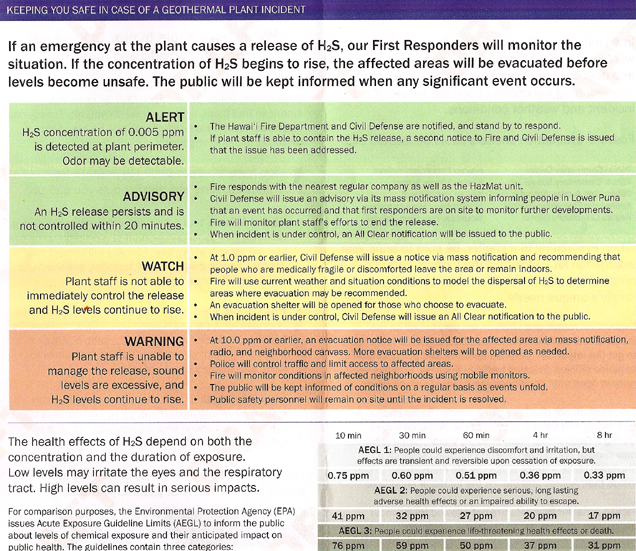