Video by David Corrigan | Voice of Stephanie Salazar | Additional video courtesy by KITV and Hawaii247.com HILO, Hawaii: The Hawaii State Office of Elections has made the unprecedented decision to take over Election Day operations in Hawaii County. Hawaii Chief Election Officer Scott Nago announced Tuesday at a press conference on Oahu that his […] 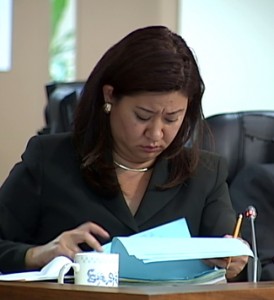 HILO, Hawaii: The Hawaii State Office of Elections has made the unprecedented decision to take over Election Day operations in Hawaii County.

Hawaii Chief Election Officer Scott Nago announced Tuesday at a press conference on Oahu that his office will rescind its delegation of state responsibilities to the County of Hawaii.

The state office will administer election day activities such as delivery and collection, control center and polling place operations. The county will only handle voter registration and absentee voting.

The state elections office says the move is meant to directly address the issues of polling place communication and timely delivery of supplies to polling places.

Apparent problems in that area led to the late openings of polling places on primary election day, forcing Governor Neil Abercrombie to declare an emergency extension of voting hours, embarrassing the county, confusing voters, and riling candidates. Nago emphasized that the change will be transparent to Big Island voters and poll workers.

The bickering between the Hawaii County Clerk Jamae Kawauchi and Nago has been well publicized this election season, growing especially heated when the state elections office took precinct record books for its investigation into what happened on election day.

Kawauchi, who is undertaking her first election this year as clerk, fired four experienced elections division staff in January, including the long time elections administrator Pat Nakamoto. Since then there have been a number of other staff terminations and sudden office closures. The state has apparently not been happy with Kawauchi’s steps to better prepare for the general election.

At the County building in Hilo on Tuesday afternoon, word was beginning to spread about the state’s decision; a first, as far as anyone can recall.

County Clerk Jamae Kawauchi was not available for comment. The elections office was open and staffed.

One official we did speak to was Kona Councilmember Angel Pilago, who expressed satisfaction with the state’s decision.

On Wednesday, it was not yet clear if Kawauchi accepts the change.

In a media release sent out on Wednesday, Kawauchi said she requested a meeting at the offices of the State Attorney General in Honolulu on Thursday, October 4, to further discuss the State Office of Elections rescission.

Kawauchi said this meeting will be attended by the Chief Elections Officer of the State of Hawaii, attorneys from the State Attorney General’s office, the Hawaii County Clerk, and Hawaii County Deputy Corporation Counsel.

She said more information will be made available, as appropriate, following this meeting.

The County Clerk herself was on hand to initiate the hearing of the Pilago’s elections related resolution at Wednesday’s council meeting.

The measure supports recommendations made by the state League of Women Voters in regards to ensuring the proper administration of the upcoming election.

Councilmembers weighed-in on the matter, although some were still confused about the specifics of the state take-over.

Dominic Yagong, who has been relatively quiet on election related matters as of late, spoke-out before the vote…

Dennis “Fresh” Onishi’s resolution urging the clerk to hire an independent and experienced elections administrator to run the November election was rendered moot. Onishi has been critical of Kawauchi’s performance and has tried to get the council to agendize measures dealing with the situation.