Video courtesy Hawaii County, File video by Daryl Lee | Voice of Stephanie Salazar PAAUILO, Hawaii: Hawai‘i Island’s grass-fed beef industry hopes to get a boost from $4.15 million dollars in improvements for the State-owned slaughterhouse in Pa’auilo. Officials say that when complete, the plant’s capacity will increase by 40% and reduce the current processing […] 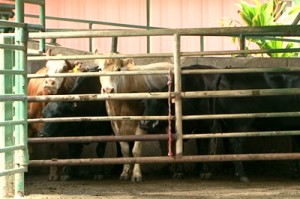 Slaughterhouse will get millions in upgrades in Paauilo

PAAUILO, Hawaii: Hawai‘i Island’s grass-fed beef industry hopes to get a boost from $4.15 million dollars in improvements for the State-owned slaughterhouse in Pa’auilo.

Officials say that when complete, the plant’s capacity will increase by 40% and reduce the current processing backlog that makes it difficult for ranchers to bring their animals to market in a timely fashion.

Improvements will be made in the critical areas of wastewater disposal, rendering of unusable solid waste, and refrigeration space… issues that long plagued the viability of the slaughterhouse.

The county says the waste that currently goes to the landfill will be transformed into useable value-added and energy producing by-products.

The money was appropriated by the State Legislature and released by the Governor directly to the County of Hawai‘i, which means Mayor Billy Kenoi was a happy man on Tuesday.

“If the rancher cannot ranch and the farmer cannot farm, we’re all in trouble. This isn’t all that we need, but it’s an important first step. We look forward to Hawai‘i Island being able to grow and expand our grass-fed beef industry,” said Hawai‘i County Mayor Billy Kenoi.

Even though the state owns the slaughterhouse, it is leased to the Hawai’i Beef Producers company, a partnership between David DeLuz Sr. and a group of ranchers. It is one of two USDA certified slaughterhouses on Hawai‘i Island, where over 75% of all the state’s cattle are raised.

Beef Producers hope the upgrades will grow the industry, and the local economy.

The County Council gave the OK to the improvements over a year ago.

This video is from April 2011, when the Council Finance Committee moved the approval for the state funding to the full council with a positive recommendation.

In the County’s recently released Food Self Sufficiency Baseline study – presented to the media in May by Jeff Melrose – only about 17% of the beef eaten on Hawai’i Island is locally produced, in spite of the fact that the cattle industry produces nearly twice the number of cattle annually that the island consumes.

The county says since the early 1990’s the cost of grain imports has made it too expensive for local ranchers to finish cattle locally. As a result, the bulk of the cattle industry ships young cattle to the mainland to be grown to market size and harvested there. Local slaughter capacity has fallen dramatically in the last 20 years and needs to be revitalized before a strong local grass fed industry can re-emerge, offcials say.

A great project for the County’s Research and Development team.

The cattle industry has gone through its challenges, and it continues to face challenges,” said Randy Kurohara, director of the County’s Department of Research & Development. “But this slaughterhouse and rendering facility really represents a milestone in the advancement of our grass-fed beef industry here. Increasing our capacity to produce locally-raised beef is very important to our island’s self-reliance.”

A project with goals this diverse needs a number of contractors. Three have been awarded. Isemoto Contracting Co. Ltd. will work to expand refrigeration capacity and install a new dry chill box to age grass fed beef before it is marketed.

Ludwig Construction will install wastewater improvements including a new septic system and improvements to enable the recycling of wash water to irrigate surrounding pastures.

Site Engineering will make repairs to the rendering plant and install equipment that turns inedible waste into compost material and animal fat for processing into biofuels.

The county says the rendering plant work and the wastewater system will take 9 months to complete. The refrigeration improvements will begin after the holidays to reduce impact on slaughterhouse use and is scheduled for completion by the summer.