Video courtesy USGS Hawaiian Volcano Observatory | Voice of Stephanie Salazar HAWAII VOLCANOES NATIONAL PARK, Hawaii: Kilauea Volcano has been putting on quite a show lately… as the lava lake within the Halemaumau Crater has reached its highest level since the summit eruption began in 2008. The lava lake at Kīlauea’s summit was only about […] 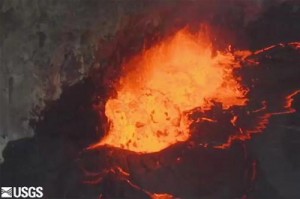 HAWAII VOLCANOES NATIONAL PARK, Hawaii: Kilauea Volcano has been putting on quite a show lately… as the lava lake within the Halemaumau Crater has reached its highest level since the summit eruption began in 2008.

The lava lake at Kīlauea’s summit was only about 150 feet below the floor of Halemaʻumaʻu crater on Sunday — the highest it has reached, according to the scientists of the USGS Hawaiian Volcano Observatory.

For the past several months, lava within the summit vent has been slowly rising. As of October 5, 2012, lava reached a level that covered the previous high-lava “bathtub” ring within the vent.

It was around this time that the bangs and booms of the volcano began to be heard as far away as the Jaggar Museum Overlook in Hawai`i Volcanoes National Park, thrilling crowds day and night.

This video shows the heat from the high lava lake level in the overlook vent, causing the walls of the vent above the lava surface to expand and fracture.

Scientists say this is the source of the cracking and booming noises emanating from the vent in recent days.

Here, we see small fragments of rock exploding from the wall and scattering onto the lake surface.

The HVO says the rise in lava level within the vent is associated with a modest uplift and expansion of Kilauea’s summit area. The root cause for this expansion isn’t clear. Scientists don’t believe there’s an increase in magma supply from below. They do believe there could be a connection in the volcanic plumbing system between the summit magma reservoir and the active Pu`u `O`o eruptive vent on Kilauea’s east rift zone.

This time, however, it appears that the associated high summit pressure has not significantly transmitted down the volcano’s east rift. The lava level within Pu`u `O`o crater, while elevated, is not extraordinarily so. And even though lava is flowing through a tube near the base of the Pu`u `O`o cone, flows haven’t reached the ocean in nearly a year.

Scientists say one possible outcome of continued summit expansion and lava level rise could be an eventual outpouring of lava on the floor of Halema`uma`u Crater. Alternatively, the increased pressure might overcome the apparent constriction, resulting in an outbreak somewhere between the summit and Pu`u `O`o, akin to the March 2011 Kamoamoa fissure eruption.

Only time will tell what happens next. For now, the show – and the symphony of bangs and booms – at Kilauea’s summit continue on.