VOLCANO WATCH: Mauna Loa not down for the count!

Volcano Watch article by USGS Hawaiian Volcano Observatory A new fact sheet on Mauna Loa titled “Mauna Loa—History, Hazards, and Risk of Living With the World’s Largest Volcano” is now available. This week’s Volcano Watch highlights some of the facts associated with Mauna Loa. You can view the entire fact sheet at: http://pubs.usgs.gov/fs/2012/3104/. Mauna Loa, […] 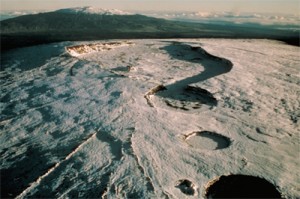 Aerial photograph looking north-northeast across the summit area of Mauna Loa (elevation 4,169 meters or 13,679 feet). At the summit is Moku’äweoweo Caldera, a volcanic depression 3 miles (5 kilometers) long.The pit craters in the foreground are part of the upper southwest rift zone. Mauna Kea Volcano rises on the skyline.

A new fact sheet on Mauna Loa titled “Mauna Loa—History, Hazards, and Risk of Living With the World’s Largest Volcano” is now available. This week’s Volcano Watch highlights some of the facts associated with Mauna Loa. You can view the entire fact sheet at: http://pubs.usgs.gov/fs/2012/3104/.

Mauna Loa, one of Hawai`i’s most active volcanoes, has produced large, voluminous flows that have reached the ocean 8 times since 1868. It last erupted in 1984, when a lava flow came within 7.2 km (4.5 miles) of Hilo.

The greatest direct hazards associated with shield volcanoes like Mauna Loa are the lava flows and volcanic gases. Although these seldom cause deaths, lava flows typically do extensive damage by burning and crushing everything in their path. Flows can travel long distances from the vent, making most communities on the Island of Hawai`i susceptible to inundation. And gas emissions can be carried across the State by the wind, affecting health and damaging crops and livestock.

Most of Mauna Loa’s eruptions commence with fountains in the summit and often migrate to vents along either rift zone. Mauna Loa eruptions produce lava at a much higher rate than those of any other Hawaiian volcano—even neighboring Kilauea—resulting in fast, long lava flows.

Mauna Loa has erupted frequently (every 6 years on average) over the past 3,000 years. Since 1843, Mauna Loa has erupted 33 times, averaging one eruption every 5 years. Seven flows from the southwest rift zone reached the ocean along the west coast of Hawai`i within a matter of hours. In 1855–56 and 1880–81, lava from the northeast rift zone did not reach the ocean but covered land within the city limits of Hilo.

Although the threat posed by eruptions from Mauna Loa’s summit and rift zones is clear, the threat posed by vents outside these areas was not fully appreciated until recently. Such “radial vents” occur over a wide area on Mauna Loa’s north and west flanks. Radial vents are located at all elevations from the summit of the volcano to below sea level. Of the more than 45 known eruptions from radial vents, 3 have occurred in the past 150 years, and 2 of those reached the sea.

If a Mauna Loa eruption occurs along the southwest rift zone, steep slopes, high effusion rates, and the close proximity of developed areas will put South Kona and Ka`u at significant risk. Precious little time may be available for response or evacuation efforts. On the other hand, Hilo is relatively far from the most active part of the rift zones, and the slopes above Hilo are gentle. Thus, while northeast rift zone eruptions can certainly threaten Hilo, the lead time for response and evacuation is likely to be substantially longer (days to weeks) than for eruptions on the southwest rift zone (hours).

Vog, or volcanic smog, is also a concern—a nuisance and potential health hazard to people and a threat to agricultural activity. During the 1984 eruption of Mauna Loa, vog blanketed much of the State of Hawaii.

According to the 2010 census, the Island of Hawai`i is the fastest-growing region in the State, with a population that grew by 24 percent in the past decade. High levels of interest and affordable land mean that more and more construction will occur on the flanks of the island’s volcanoes.

Volcanoes often show signs of unrest and the USGS’s Hawaiian Volcano Observatory (HVO) has recently upgraded its monitoring networks to improve its ability to detect unrest. Numerous seismic, GPS, and tilt stations across the flanks of Mauna Loa keep a vigilant eye on the mountain 24 hours a day. When unrest is detected, scientists notify emergency-management officials and increase monitoring efforts.

Eruptions are an inevitable part of Mauna Loa’s future, and risk will continue to grow as population and development increase. But the hazards associated with this volcano can be anticipated, and the risks diminished, by vigilant monitoring of the volcano’s behavior, documenting its past behavior, and educating its residents, visitors, and local leaders. 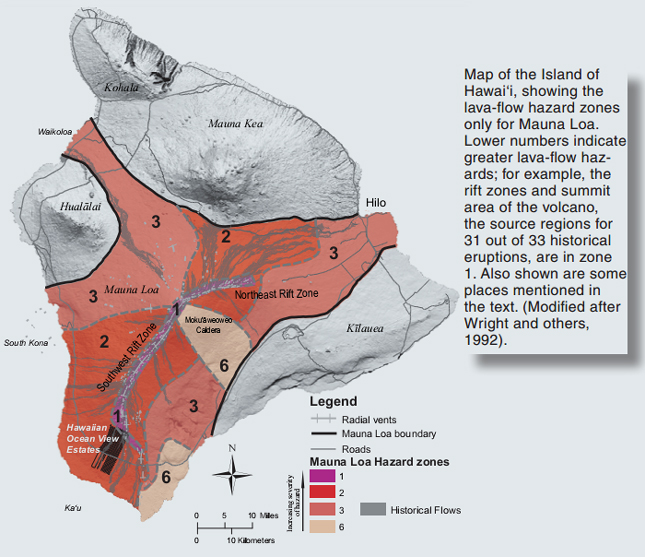