Video by Baron Sekiya, Hawaii247.com | Voice of Stephanie Salazar HILO, Hawaii: A campaign of bullying, intimidation and harassment is being waged against students, faculty, and staff of Connections New Century Public Charter School in Hilo. Thats the charge being levied by attorney Ted Hong, who has been hired by the school. On October 18, anti-school […] 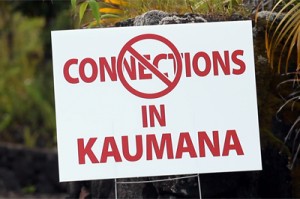 One of the signs posted on a property in Kaumana

HILO, Hawaii: A campaign of bullying, intimidation and harassment is being waged against students, faculty, and staff of Connections New Century Public Charter School in Hilo.

Thats the charge being levied by attorney Ted Hong, who has been hired by the school. On October 18, anti-school stickers were found plastered near all the school entrances.

At a 2 p.m. press conference held at the school entrance on Monday, Hong said students arriving for another day of school – and their parents – were shocked to see such an offensive act of hate.

Hong says the Hawaii County Police Department has been notified, and spoke of a $500 bounty to find the people who did this.

Connections started in 1998 with 165 students as a “school within a school” at Mountain View Elementary School. Currently, the school is separated in two campuses, with the lower and middle school at the downtown Hilo Kress Building site and the High School located across town at the Nani Mau Gardens. School officials say the school now serves 361 students from Ka’u to Laupahoehoe with a wait list for all grades.

John Thatcher, the Connections School principal, says that students and parents benefit from a safe and creative learning environment at Connections.

The school has high hopes for a new campus in Kaumana.

But, the planned ag education site is off to a bad start, in terms of public relations.

In the area surrounding the future campus, there are a number of signs, posted in yards and along the street, protesting the new addition to Kaumana.

In preparation for fencing the leased land, which is under the jurisdiction of the Hawaii State Board of Land and Natural Resources, a number of ohia trees were cut down, which is in violation of the lease.

Attorney Hong said it was not the school’s intention to cut the trees down, and put blame on the fence contractors.

Now, the Board of Land and Natural Resources will take the matter up during its October 26 meeting in Honolulu. The school could face a number of fines, and may have to remove the fence and restore the area at their own expense.

However, both Hong and Thatcher said that there was confusion over the terms of the lease.

Nonetheless, the matter has earned the school some detractors, who presumably have been putting all the stickers on the school. Hong says the intimidation tactics will not work.