Media release from University of Hawaii at Manoa A new study, which appears in the November issue of Nature Geoscience, finds that a deep connection about 50 miles below Earth’s surface can explain the enigmatic behavior of two of the world’s most notable volcanoes, Hawaii’s Mauna Loa and Kilauea. The research conducted by scientists at […]

Media release from University of Hawaii at Manoa 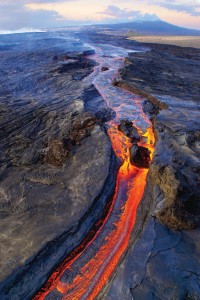 A new study, which appears in the November issue of Nature Geoscience, finds that a deep connection about 50 miles below Earth’s surface can explain the enigmatic behavior of two of the world’s most notable volcanoes, Hawaii’s Mauna Loa and Kilauea. The research conducted by scientists at UH Manoa, Rice University, the U.S. Geological Survey (USGS) and the Carnegie Institution of Washington offers the first plausible model that can explain both the opposing long-term eruptive patterns at Mauna Loa and Kilauea — when one is active, the other is quiet, and vice versa — as well as the episode in 2003-2007 when Global Positioning System (GPS) records showed that both inflated concurrently.

“We know both volcanoes are fed by the same hot spot, and over the past decade we’ve observed simultaneous inflation, which we interpret to be the consequence of increased pressure of the magma source that feeds them,” said lead author Helge Gonnermann, Assistant Professor of Earth Science at Rice University. “We also know there are subtle chemical differences in the lava that each erupts, which means each has its own plumbing that draws magma from different locations of this deep source.”

Added James Foster, co-author and Assistant Researcher at the UHM School of Ocean and Earth Science and Technology (SOEST), “When we fitted the deformation, which tells us how much a volcano inflates and deflates, and the lava eruption rate at Kilauea, we found that our model could simultaneously match the deformation signal recorded over on Mauna Loa. The model also required an increase in the magma supply rate to the deep system that matched very nicely with our interpretations and the increased magma supply suggested by the jump in CO2 emissions that occurred in late 2003.”

The researchers constructed a simple computer model for the magma storage and transport systems for Kilauea and Mauna Loa that connected them via a deep partially molten layer that can be thought of as a deep magma reservoir. The transmission of pressure through the permeable rock in the asthenosphere is akin to the processes that cause water and oil to flow through permeable layers of rock in shallower regions of Earth’s crust.

“In the GPS records, we first see inflation at Kilauea and then about a half a year later at Mauna Loa,” Gonnermann said. “Our hypothesis is that the pressure is transmitted slowly through a partially molten and thereby porous region of the asthenosphere, which would account for the simultaneous inflation and the lag time in inflation. Because changes in pore pressure are transmitted between both volcanoes at a faster rate than the rate of magma flow within the porous region, this can also explain how both volcanoes are dynamically coupled, while being supplied by different parts the same source region.”

Kilauea and Mauna Loa are among the planet’s most studied and best-instrumented volcanoes and have been actively monitored by scientists at USGS’s Hawaiian Volcano Observatory (HVO) since 1912. Kilauea has erupted 48 times on HVO’s watch, with a nearly continuous flank eruption since 1983. Mauna Loa has erupted 12 times in the same period, most recently in 1984.

“To continue this research, we submitted a proposal the National Science Foundation (NSF) earlier this summer to extend our study back in time to cover the last 50 years,” Foster said. “We plan to refine the model to include further details of the magma transport within each volcano and also explore how some known pre-historic events and some hypothetical events at one volcano might impact the other. This work should help improve our understanding of volcanic activity of each volcano.”

There has been disagreement among Earth scientists in the past about the potential links between adjacent volcanoes, and Gonnermann is hopeful the new model could be useful in studying other volcanoes like those in Iceland or the Galapagos Islands.

“At this point it is unclear whether Hawaii is unique or whether similar volcano coupling may exist at other locations,” Gonnermann said. “Given time and ongoing advances in volcano monitoring, we can test if similar coupling between adjacent volcanoes exists elsewhere.”

Study co-authors include Michael Poland of USGS HVO, Cecily Wolfe of UH Manoa and the Carnegie Institution of Washington, Benjamin Brooks of UH Manoa, and Asta Miklius of USGS HVO.

This research was supported by the USGS and the NSF. The Kilauea and Mauna Loa GPS networks are supported by grants from the USGS, NSF and NASA, and operated in collaboration by the USGS, Stanford University and the Pacific GPS Facility at UH.