Eviction of Abel Lui and supporters at Kawa underway

ABOVE PHOTO: The scene at Kawa this morning. County dump trucks and vehicles – along with an ambulance – were stationed along Highway 11 in front of Kawa. Abel Simeona Lui, seen in the photo, and others were evicted from the property in preparation of an archaeological survey. Photos by Geneveve Fyvie courtesy Ka’u Calendar. […]

ABOVE PHOTO: The scene at Kawa this morning. County dump trucks and vehicles – along with an ambulance – were stationed along Highway 11 in front of Kawa. Abel Simeona Lui, seen in the photo, and others were evicted from the property in preparation of an archaeological survey. Photos by Geneveve Fyvie courtesy Ka’u Calendar. 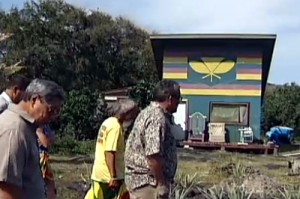 KAWA, Hawaii (updated 1:45 p.m.): The eviction of Abel Simeona Lui and his supporters from Kawa is reportedly underway at this hour.

Initially, there was confusion over whether or not Lui had been taken to the hospital, as police are said to be clearing visitors out of the area. A spokesperson for the mayor said Abel was not taken to the hospital, he left the scene of his own volition. The county is reportedly poised to demolish the homes and structures that Lui has called home for years.

Mark Thomas, who spoke directly to Big Island Video News over the phone, posted to Facebook that “Abel is being taken to the hospital.access to Kawa is being denied to all. county dump trucks are poised to demolish his house!! we need videos and witnesses!!!!!!” Thomas has been by Abel’s side throughout Lui’s troubles with authorities over the land.

Julia Neal of the Ka’u Calendar reports the county has confirmed it is conducting the action at Kawa today. Big Island Video News eventually obtained the media release as well. In it, the county states:

Social service agencies will assist anyone staying at Kāwā with securing other living arrangements. Any structures on the property will be disassembled by workers from the County’s Department of Public Works.

Ilihia Gionson, an executive assistant to the mayor, says the structures found on the property were not demolished. Instead, they are being disassembled carefully by carpentry crews “such that the structures, along with any other property found, can be claimed within 30 days and reassembled on a more appropriate site.”

The county purchased Kawa from the Edmund Olson Trust last year through the Public Access, Open Space and Natural Resources Preservation Fund. Lui has long argued that the lands are his by allodial right, saying his great-great-grandfather, Timoteo Keawe, received the land in a royal grant and that under kingdom law. Lui says the title held by the county is clouded and invalid. He has lived on the land for years, acting as konohiki and caretaker of the aina.

Big Island Video News has been following this situation since 2008, when nervous officials were stopped by Lui and other native subjects of the Hawaiian Kingdom, before they could survey the lands. This happened under a different administration. Harry Kim was the mayor at the time. Despite the passions on display, the stand-off ended peacefully. At the end, everyone joined hands in prayer, led by Lui.

Since that time, things have gotten more desperate for Lui. When the purchase of the land seemed eminent in 2010, Lui took to the Highway, living by the road in a constant vigil, trying to raise awareness for his struggle.

Meanwhile, court decisions affirmed the county’s right to go ahead with the land acquisition, purchased from the Edmund Olson Trust in November 2011 for $3.9 million. The court also granted the county the authority to evict Lui and his supporters at their discretion.

All the while, Lui grew increasingly erratic, as his time on the land appeared to be limited. As his roadside vigil continued into its second year – transforming the area into a makeshift homestead complete with a working garden – Lui stressed that he wanted to meet with the mayor personally.

Lui has been a divisive character. Some find him to be a sympathetic figure, fighting for his rights as a native Hawaiian. Others see him as a squatter, and have been pressuring mayor Billy Kenoi to oust him and his supporters from the area.

Lui and his supporters welcomed the mayor and some staff to the area of Kawa in April. For a time, it appeared as if there might be a peaceful resolution to the conflict.

But when an archaeological survey of the property began in September, part of the creation of a management and stewardship plan, tensions began to rise again.

“We’re going to take care of Kawa Bay by working with the families, protecting the cultural and archaeological sites,” Kenoi told West Hawaii Today’s Nancy Cook Lauer . “We want to put our management plan in place and then execute a transition. It’s all about doing it right.”

In Thursday’s county media release, the mayor’s office says that once the archaeological survey of the reported “large burial complex, numerous smaller burial sites, and hundreds of archaeological features” which are protected under law is complete, “a management plan will be implemented to protect the cultural, historical, and burial features of Kāwā while allowing public access to learn about and enjoy this wahi pana, this special place.” In the meantime, sources say it appears no one will be allowed down to the popular beach.

The reports are already riling those in support of Hawaiian sovereignty. In an email blast sent out to press and public officials, Jim Albertini of the Malu ‘Aina Center For Non-violent Education & Action wrote, “It’s a sad day that a Hawaiian Mayor, Billy Kenoi, could not engage in Ho’oponopono with Hawaiian Abel Simeona Lui and others at Kawa’a to resolve matters in a just and peaceful way. The Hawaiian people and the land cry out for justice not police action.”

We will have more on this as it becomes available. A news videographer will be on the scene.