Video by Tim Bryan KAWA, Hawaii: On Thursday, news broke of the sudden eviction of long time Kawa resident Abel Simeona Lui and his supporters, as Hawaii County police and public works closed the popular beach and dismantled the structures Lui called home. A county media release said that the evictions were a part of […] 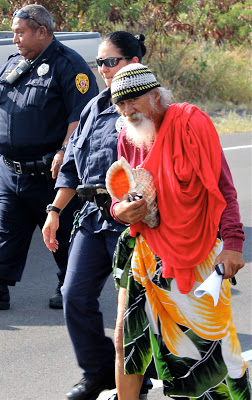 A county media release said that the evictions were a part of an archaeological survey being conducted of the large burial complex, numerous smaller burial sites, and hundreds of other cultural features at Kawa. Burial and historical sites are afforded protection under law.

The county purchased a portion of Kawa from the Edmund Olson Trust last year through the Public Access, Open Space and Natural Resources Preservation Fund. Lui has long argued that the lands are his by allodial right, saying his great-great-grandfather, Timoteo Keawe, received the land in a royal grant and that under kingdom law. Lui says the title held by the county is clouded and invalid. He has lived on the land for years, acting as konohiki and caretaker of the aina.

The situation grew contentious, and the county was granted the authority to evict Lui and his supporters by the courts.

On the day of the eviction, rumors that Lui had to be taken to the hospital were not accurate. Officials said he stopped at an ambulance parked with the fleet of county vehicles on the Highway by Kawa on Thursday. Then he left by himself in a vehicle, on his own volition. The sequence was captured by Geneveve Fyvie of the Ka’u Calendar and shared with Big Island Video News.

Lau, who has taken an acive role in the stewardship plans for Kawa, said there was one arrest on Thursday, but no injuries.

Lau confirmed that the area will be closed for 30 days while the county conducts its survey. Access may be granted on a case by case basis.

The county also cut a quick access road – mostly dirt to fill the pukas – over the entrance that just hours earlier contained all sorts of Hawaiian sovereignty signs, flags and bulletin boards.

Meanwhile, through posts on his Facebook page, Lui reported that he was doing alright, staying at a friend’s house nearby. “Mahalo to everyone in support,” he wrote. “I am Here for the Duration!”