HILO, Hawaii: Local author Tom Peek will be reading from his new novel, Daughters of Fire, on Saturday, November 10, at 1:00 p.m. at Basically Books in Hilo. The novel – which took Peek over a decade to research and write – has already been generating buzz in the local community. “Daughters of Fire”, states […] 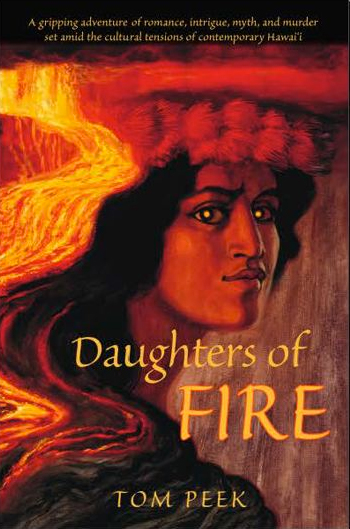 HILO, Hawaii: Local author Tom Peek will be reading from his new novel, Daughters of Fire, on Saturday, November 10, at 1:00 p.m. at Basically Books in Hilo.

The novel – which took Peek over a decade to research and write – has already been generating buzz in the local community. “Daughters of Fire”, states a media release from publisher Koa Books, “illuminates how the islands’ transformation into a tourist mecca and developers’ gold mine sparked a Native Hawaiian movement to reclaim their culture, protect sacred land, and step into the future with wisdom and aloha.”

Peek is already well known in Volcano for his music – he has even assisted Big Island Video News by providing a musical backdrop for some of our Kilauea activity updates. His  “Empowered by the Pen” workshops have been popular since they began in 1991. From Koa Books:

Peek lived his early life in Minnesota on a backwaters island in the Upper Mississippi. After vagabonding by boat through the South Seas, he settled on the island of Hawai’i, where he’s lived for more than two decades. There he’s been a mountain and astronomy guide on Mauna Kea and an eruption ranger, wildland firefighter, and exhibit writer on Kilauea, working closely with Hawaiian elders and cultural practitioners on both volcanoes. These adventures provided Peek with the material for his Big Island novel.

Peek has also written effective newspaper commentaries, and in recent years has defended the summit of Mauna Kea from overdevelopment through his testimony at public hearings and meetings.

The premise of Daughters of Fire was described by Koa Books in this media release:

A visiting astronomer falls in love with a Hawaiian anthropologist who guides him into a Polynesian world of volcanoes, gods, and revered ancestors. The lovers get caught up in murder and intrigue as developers and politicians try to conceal that a long-dormant volcano is rumbling back to life above the hotel-laden Kona coast. The anthropologist joins forces with an aging seer and a young activist, and these three Hawaiian women summon their deepest traditions to confront Hawai’i’s latest, most extravagant resort as the eruption and the murder expose deep rifts in paradise.

Daughters of Fire is available in bookstores throughout Hawaii and the U.S., in Costco stores statewide, and on Amazon and other online retailers, according to the publisher. Author readings are scheduled for Basically Books in Hilo, Saturday November 10 at 1:00 p.m. and Native Books, Ward Warehouse in Honolulu, Sunday November 11 at 3:00 p.m.  A similar event has already been held in Volcano Village.

“Fiction is a potent way to illuminate a place and a people. Tom’s novel does this with uncanny authenticity.”

“… a sweeping tour of Hawai‘i, honestly portraying islanders of all hues and voices, written by an author who took the time to listen and observe.”

Barack Obama, President of the United States
on King Kamehameha Day 2010, from the frontispiece of Daughters of Fire

“The Hawaiian narrative is one of both profound triumph and, sadly, deep injustice. It is a story of Native Hawaiians oppressed by crippling disease, aborted treaties, and the eventual conquest of their sovereign kingdom. These grim milestones remind us of an unjust time in our history.”

“a page-turning thriller on the surface, a deep mediation on culture one level down, a spiritual tour-de force at the core.”