Video by David Corrigan, voice of Stephanie Salazar HILO, Hawaii: National Rifle Association President David Keene spoke at the Conservative Forum for Hawaii on Monday evening, here at the Naniloa Hotel’s Crown Room in Hilo. “Today, guns are cool,” Keene told the crowd of about a hundred. This marks the first time a sitting NRA president […] 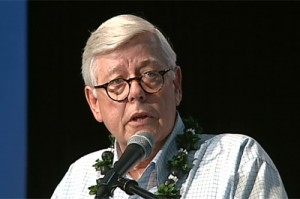 “Today, guns are cool,” Keene told the crowd of about a hundred.

This marks the first time a sitting NRA president has ever visited Hawaii in an official capacity, organizers say.

The Forum was opportunity to the talk on 2nd Amendment issues of importance to all citizens, which includes an individual’s right to bear arms.

“Its about values,” Keene said. “Its not about crime. Its not about gun violence. Its not about all those things. Its about what the second amendment represents… which is individual responsibility, freedom, and values that a lot of people don’t like anymore.”

However, the limits of that right are always being tested, according to Keene. The NRA president warns of a coming battle with newly elected president Barack Obama over the right to bear arms.

“And I can tell you that a politician who takes on a country with those beliefs on those issues  is in for some rough sledding, and at the end of the day is not going to prevail,” Keene said, “no matter how heady he thinks the winds may be just because he’s been re-elected.”

Earlier in the day on Monday, Keene was in Kona with “Island of Hawaii Friends of NRA” for a briefing on the West Hawaii Public Range project, planned for Puuanahulu near the transfer station.

“We’re very involved both in providing technical help to people that are setting up indoor and outdoor ranges,” Keene said, “and we provide grants… and I believe a grant was just made here to help develop that range… and I toured it.”

“I flew over… there’s a lot of black rock down there,” Keene joked.

“When you open that range, I’ll come and shoot with you,” Keene promised.

Keene is the son of Wisconsin labor organizers, and is former chairman of the American Conservative Union. He is an attorney, columnist, political activist and lobbyist who has worked in the White House and Congress and has been involved in nearly every congressional battle over gun rights since the early 1970s.