Free-floating planet candidate is the closest such object to the Solar System, 100 light-years away By David Corrigan MAUNA KEA, Hawaii: Canada-France-Hawaii Telescope, located on the summit of Hawaii Island’s tallest mountain, has assisted the European Southern Observatory’s Very Large Telescope in spotting what is likely a planet wandering through space without a parent star. The […]

Free-floating planet candidate is the closest such object to the Solar System, 100 light-years away

MAUNA KEA, Hawaii: Canada-France-Hawaii Telescope, located on the summit of Hawaii Island’s tallest mountain, has assisted the European Southern Observatory’s Very Large Telescope in spotting what is likely a planet wandering through space without a parent star.

The announcement was made in a science release issued by the observatories on Wendesday. 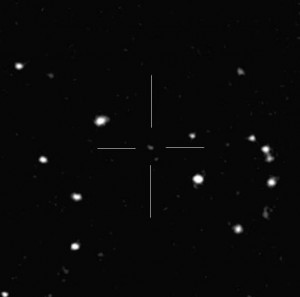 CFBDSIR2149, a Jupiter-mass free floating planet, was imaged directly by the WIRCam camera on the Canada France Hawaii Telescope (right) as well as the SOFI camera on the ESO New Technology Telescope in Chile.

Objects like CFBDSIR2149 roam through space without any ties to a star. They became known in the 1990’s and recent studies suggest there may be “huge numbers of these little bodies in our galaxy, a population numbering almost twice as many as the main sequence stars present” according to release footnotes.

…it was not possible for astronomers to know whether they were really planets or brown dwarfs, “failed” stars that lack the bulk to trigger the reactions that make stars shine.

But astronomers have now discovered an object, labelled CFBDSIR2149, that seems to be part of a nearby stream of young stars known as the AB Doradus Moving Group. The researchers found the object in observations from the Canada France Hawaii Telescope and harnessed the power of ESO’s Very Large Telescope to examine its properties.

The AB Doradus Moving Group is the closest such group to the Solar System. Its stars drift through space together and are thought to have formed at the same time. If the object is associated with this moving group – and hence it is a young object – it is possible to deduce much more about it, including its temperature, mass, and what its atmosphere is made of. There remains a small probability that the association with the moving group is by chance.

The link between the new object and the moving group is the vital clue that allows astronomers to find the age of the newly discovered object. This is the first isolated planetary mass object ever identified in a moving group, and the association with this group makes it the most interesting free-floating planet candidate identified so far.

Free-floating objects like CFBDSIR2149 are thought to form either as normal planets that have been booted out of their home systems, or as lone objects like the smallest stars or brown dwarfs. In either case these objects are intriguing – either as planets without stars, or as the tiniest possible objects in a range spanning from the most massive stars to the smallest brown dwarfs.

The research paper can be read here.

“Looking for planets around their stars is akin to studying a firefly sitting one centimetre away from a distant, powerful car headlight. This nearby free-floating object offered the opportunity to study the firefly in detail without the dazzling lights of the car messing everything up. These objects are important, as they can either help us understand more about how planets may be ejected from planetary systems, or how very light objects can arise from the star formation process. If this little object is a planet that has been ejected from its native system, it conjures up the striking image of orphaned worlds, drifting in the emptiness of space. Further work should confirm CFBDSIR2149 as a free-floating planet. This object could be used as a benchmark for understanding the physics of any similar exoplanets that are discovered by future special high-contrast imaging systems, including the SPHERE instrument that will be installed on the VLT.”